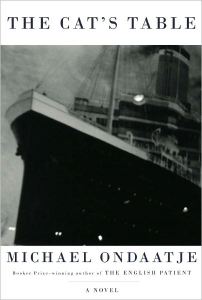 This was my first time reading Ondaatje.  I confess that seeing The English Patient film years back led me to steer clear.  (For those of you who have not seen The English Patient, and I think there might be 4 of you, let me tell you that it’s a sanctimonious hell on the big screen.  I like to refer to it as the “beige movie.”)

The Cat’s Table is the story of a boy who boards a ship called the Oronsay, which travels from Sri Lanka to England in the early 1950s.  The boy, Michael (nicknamed Mynah), is 11 years old, and is traveling alone on this 3-week voyage.  He soon meets up with two other boys, Cassius and Ramadhin, and their adventures begin.  The book is about how that 3-week voyage managed to shape the life of the boy, and the story eventually hops back and forth between his pre-teen adventure and his adult life.  The trip had great impact on him.  Three weeks can change everything.  I quickly got the message that no one should ever “feel unimportant in the scheme of things,” which is certainly a thought that anyone can appreciate.

Ondaatje’s observations are acute.  There are passages that make a distinct impression, such as my personal favorite below:

“Mr. Fonseka would not be a wealthy man.  And it would be a spare life he would be certain to lead as a schoolteacher in some urban location.  But he had a serenity that came with the choice of the life he wanted to live.  And this serenity and certainty I have seen only among those who have the armour of books close by.”

Love that reference to books.  But I’m digressing again.

The trouble that I had with this book is that I started to feel like he was writing in sound bites.  I wanted more from the story.   I started to grow impatient with Ondaatje’s musings, because they started becoming more important than the advancement of the plot.  The story felt disjointed, and for me, the “darker” ending seemed to have very little to do with the main character’s on-ship interactions with a series of recurring characters.  Overall, I felt like I was supposed to admire the profound writing more than the story, which left me disappointed.  Only 2 stars for me.