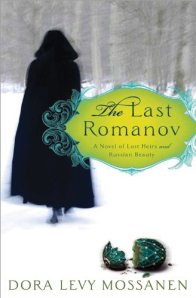 With many thanks to Netgalley and Sourcebooks Landmark, we were given the opportunity to read The Last Romanov before its April 2012 release.  The Royal Romanovs have long been the fascination of many, as their extravagance and naiveté ultimately led to their horrific murders in 1918.  The story is a tragedy of enormous proportions, starting with a Tsar who could not see the political upheaval that threatened both his country and his family.

This account follows the life of Darya Borodina Spiridova (fictional); a woman whose devotion to the Russian Imperial Family brought her riches, love, and eventually, a haunted existence.  The bulk of the story takes place during the reign of Nicholas II and his wife Alexandra, during which Darya is a young woman.  Darya’s charge is the Tsar and Tsarina’s sickly son Alexei, the heir to the throne.  Alexei’s days are plagued by hemophilia, a bleeding disease that consistently threatens the child’s life.  Darya was largely responsible for the boy’s wellbeing, including keeping his disease at bay.

The book’s quirky turn is that Darya is magical.  She has one opal eye, which allows her to heal the sick, sense danger, and see people’s true characters.  When threatened, she tastes ash.  If hurt, she simply heals herself.  When angered, she could scare the wits out of just about anyone.

Her attempts, however, to heal the ailing Alexei were not enough to please the Royal couple, which led to the introduction of the infamous Rasputin.  The “Mad Monk” was reputed to be a mystic, and a faith healer.  With his calming words, he could stem Alexei’s affliction at a moment’s notice.  (Skeptics have long maintained that he did not heal the boy, but rather hypnotized him into a calmer state, which would diminish the symptoms of the disease.)  Regardless, he became an integral character of the book, as repugnant as he was.  Darya wasn’t a fan, but the two eventually shared an odd mutual respect.

In the book, Darya witnessed the murder of the Romanov family.  She maintained afterward that Alexei survived the execution, and she believed this to be true until the ripe old age of 104.  It was just a matter of finding him.  Her only goal in life was to put Alexei where he belonged: on the throne.  Hence, The Last Romanov.  Over the course of her life, Darya became an eccentric and formidable character, one who readers likely won’t forget.

While I’m always enthusiastic about reading stories about the Romanovs, this story was a bit of a reach for me.  That’s not to say that I didn’t enjoy it; it was very creative.  It was a good mix of historical fiction and fantasy.  What left me a little perplexed was why Darya had to have special powers.  For me, it made the story teeter between a really good read, and a fantasy from the YA category.  The story of the Romanovs is fascinating enough; it doesn’t need a new character who has otherworldly talents (including a secret past).  Truly, during such an opulent time, the protagonist’s powers were almost… superfluous.  The story didn’t need more magic.  Rasputin took care of that.  3 stars.