The Winter Palace is indeed impressive historical fiction. Betrayal, intrigue, espionage, an evil and selfish empress, chaos, maddness, torture and banishment in the court, to end with a final coup. Ms. Stachniak spins this tale beautifully. 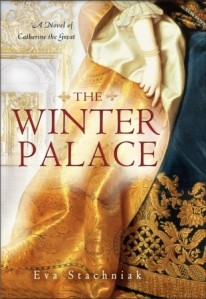 Synopsis: (from Goodreads) The Winter Palace tells the epic story of Catherine the Great’s improbable rise to power—as seen through the ever-watchful eyes of an all-but-invisible servant close to the throne.

Her name is Barbara—in Russian, Varvara. Nimble-witted and attentive, she’s allowed into the employ of the Empress Elizabeth, amid the glitter and cruelty of the world’s most eminent court. Under the tutelage of Count Bestuzhev, Chancellor and spymaster, Varvara will be educated in skills from lock picking to lovemaking, learning above all else to listen—and to wait for opportunity. That opportunity arrives in a slender young princess from Zerbst named Sophie, a playful teenager destined to become the indomitable Catherine the Great. Sophie’s destiny at court is to marry the Empress’s nephew, but she has other, loftier, more dangerous ambitions, and she proves to be more guileful than she first appears.

With dazzling details and intense drama, Eva Stachniak depicts Varvara’s secret alliance with Catherine as the princess grows into a legend—through an enforced marriage, illicit seductions, and, at last, the shocking coup to assume the throne of all of Russia.

If you are however, thinking this novel is solely about Catherine and her greatness as ruler of Russia, you may wish to take note that it is far more about the palace spy Vavara and her fight to keep Catherine relevant and help her rise to power.  Barbara, the Polish bookbinder’s daughter, the foreigner, handed a more appropriate Russian name of Vavara for when she succeeds in becoming the palace tongue. Vavara is groomed for the Empress Elizabeth, but her strong connection and favour to Princess Sophie is what sets her on the path to do everything in her power to assure Catherine succeeds in taking over the crown.

I knelt on the ground, recalling the first time I saw her, a child of fourteen arriving in Moscow, unsure of her fate. I thought of the young woman she became, branded by injustice and pain, singed by humiliation. Much had been taken from her and yet her heart had not been broken. My Empress, I thought.

You need to wait until the final 80 pages or so before you are able to read about the Catherine that is to be “Catherine the Great”. And it is here that the story really grabs hold of you. But never mind that, because it is all fulfilling and fun as we listen to Vavara weave her interesting tales of betrayal and secrets and her undying love and support for Catherine. This is more of a tale of friendship between Vavara and Catherine.

So that all Elizabeth had destroyed could be repaired, all that she had filled with secrecy could be illuminated by the truth of the new reign

The Winter Palace is however wonderful and Stachniak’s writing is vivid and full with delightful details. I did feel slightly disappointed though as you are led to believe this is more about Catherine, and her time as ruler, given the full title, (The Winter Palace: A novel of Catherine the Great) but I then I decided to sit back and enjoy the fact that this was a story written through the eyes of Vavara, and her determination to see Catherine as the successor to Empress Elizabeth. It is Vavara’s story giving us insider information about palace betrayal and the secretive nature of Imperial Russia and her growing dislike for the life shrouded in secrecy and betrayal.

The words that come to me are simple, though I will have to disguise them in my letter: I know what power does to your heart. I know the price of fear. Your world is not the world I want for my child.

Some parts around the middle did begin to drag, and some were a bit tiresome to hear repeated like Empress Elizabeth’s continuing fear, jealousy and selfishness, but overall, a highly worthwhile and very enjoyable story. 3.5 stars.

I read this too for Random House Canada’s Historical Fiction Challenge. You can check the Challenge out here, as you still have until the end of February to challenge yourself to read their selected list of titles.

You may wish to watch the Winter Palace Book Trailer here

2 thoughts on “Review: The Winter Palace”