Ready Player One by Ernest Cline

This book was chosen by the Opinionless Book Club based solely on the jokes that emerged after reading the description and noting that in the year 2044 (when this book takes place) all things 80’s are worshiped as a cultural phenomenon. As you can imagine, the mullet, shoulder pads and neon clothing references ran a plenty!

The story is about a video game challenge that will make its winner the owner of the free, on-line world of OASIS and a bazillionaire. An evil corporation is trying to win the game before anyone else so that they can exploit and commercialize OASIS. The unlikely hero, a poor, on-line recluse called Wade Watts, is determined to win this thing on his own. He is an expert on all things James Halliday (the creator of the challenge and of OASIS) who grew up during the time of Star Wars, Space Invaders and K cars. Wade eventually teams up with a couple of other misfits and an “epic battle” between good and evil takes place.

The beginning of this book was GREAT! Lots of nostalgia and plenty of moments where I found myself literally laughing out loud! If you were a child of the 80s you will definitely recognize quotes and characters from the movies, music and video games of the day (only a disappointing two Duran Duran references tho!!). By the middle of the book, the magic fades. The “love story” takes over and it gets a bit cheesy and dull (lots of dialogue involving video game moves and Rush songs). By this point, however, you are already invested in the story and it is just clever enough to keep you going. By the end there is a glimmer of the wit from the first part (the Ultraman and Mechagodzilla sequences cut me up!) but you can totally see the outcome from million a miles away. I will give it a 3 star rating and say that I think boys will enjoy it more than girls.

Stories I Only Tell My Friends by Rob Lowe (Audiobook) 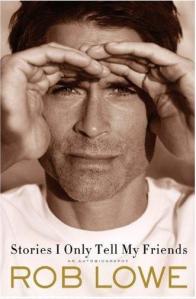 Ok– don’t make fun of me! As I read this book (or rather as Rob Lowe read it to me) I developed a little bit of a crush on this former pin-up of the 1980s! What a gracious, appreciative and well spoken guy he is! He came across as intelligent and witty and did some fantastic celebrity impressions (Bill Clinton, Tom Cruise and Robert Wagner were particularly fun!).

There was nothing earth shattering that you will learn about Rob Lowe by reading this (except maybe that his Hollywood marriage is still going strong after 20 plus years!!) and it did not seem like a platform to excuse his bad movie choices or his bad behaviour. He just seemed to think of himself as any other guy who does a job and strives to do it well. He went into quite a bit of detail of the filming of his first movie, The Outsiders– one of my first experiences of the book was waaaaay better than the movie– and was interested to hear that most of his scenes were left on the cutting room floor. They have since rereleased it calling it The Outsiders, The Complete Novel and have included more from his character, Soda-pop, and that has me thinking that i just might be interested in revisiting the film.

I did find some of his early encounters with celebrity quite interesting as well. He really seemed to be at the right places at the right times to get his foot firmly in the Hollywood door. I think that he has come through a lot better than many who live the kind of reckless life he did during the decadent decade! A surprising 3 1/2 star rating and say that I think girls will enjoy it more than boys!