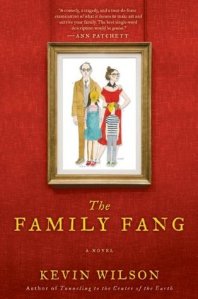 If you would like to feel like the best parent on the planet, pick up this book.

As I’m sure you already know, The Family Fang is about a set of parents who, in their insatiable quest to inflict their “art” on unsuspecting people, come close to ruining their children. Who are the Fangs’ children?  Why, Child A and Child B, of course.  (Known as Annie and Buster to the sane.)  They are called Child A and Child B by their parents because the two are no more than characters in the Fangs’ lifelong art production.  Referring to them as Annie and Buster would imply that they were actual people, with actual feelings.  Caleb and Camille Fang’s “art” always came first.

Ah, their “art.”  Lovely stuff.  The kind of artistic impression that leaves people confused, angry, and sometimes hurt.  A never-ending improv of insanity, where the two stage unbelievable scenes while videotaping people’s reactions.  The scenes could include anything from making Buster pretend that a strange couple in a mall were his actual parents, to Caleb proposing to Camille on an airplane over a loudspeaker, only to have Camille say ‘no thanks.’  Setting themselves on fire wasn’t out of the question, nor was making their kids take on productions that were emotionally (and sometimes physically), dangerous.  In short, they were crazy.

What was particularly troubling was their determination to ignore what they were doing to their children.  The kids grew up damaged, and while the book travels back and forth between Annie and Buster’s bizarre childhood and their troubled adulthood, I found myself silently cheering every time they found enough strength to separate themselves from their upbringing.  As adults, Annie and Buster make many foolish choices, but the heart of the book is how they try to overcome, and how they prop one another up in times of pain.  It’s easy to grow attached to Annie and Buster, with their complicated thinking and ridiculous mistakes.  (Some are actually quite funny.)  But even when they return to the nest as adults, they somehow manage to stay grounded, in the presence of two parental figures who truly needed a good slap.  Can’t tell you how many times I wanted to crawl into the book to rescue Children A & B when they were kids, or laugh with them as adults.  I have also learned to stay away from potato guns, but that’s entirely another matter.

The end of the book takes a pretty wild and improbable turn, which left me scratching (and shaking) my head.  Still, in my opinion, the outcome for Annie and Buster was satisfying.  Overall, it was well written, and immensely creative.  I flipped back and forth between three and four stars countless times, and eventually decided that I couldn’t punish the book simply because I couldn’t stand two of the characters.  I eventually decided that a book that shared such a madcap story should get the nod.  4 stars.

4 thoughts on “Review: The Family Fang”