I listened to the Memory Keeper’s Daughter on audiobook CD loaned to me by the library. I have this book in my closet somewhere, I know I do, I picked it up a few years ago, read a couple of pages and then moved on to something else that grabbed my attention more than this was at the time.

One day I was browsing the audio CDs at the library and found it there. Thought it might be interesting as Martha Plimpton was narrating. Sadly, no.

It was around the 75% mark where I desperately wanted to fling the CD out the window, or drive my car in to a pole. I shut it off because (well, it was safer than me driving my car off in to a pole) I couldn’t take it anymore and seriously debated not finishing. I was SO irritated and frustrated by the ridiculousness of Dr. David Henry and the harm he created for all.

Then, I thought, well, I’ve gotten this far, I only have 2 CDs left (so honestly, it is 2 CDs too long in my opinion!), let’s just carry on and get it over with.

Here’s they synopsis, courtesy of Goodreads: On a winter night in 1964, Dr. David Henry is forced by a blizzard to deliver his own twins. His son, born first, is perfectly healthy. Yet when his daughter is born, he sees immediately that she has Down’s Syndrome. Rationalizing it as a need to protect Norah, his wife, he makes a split-second decision that will alter all of their lives forever. He asks his nurse to take the baby away to an institution and never to reveal the secret. But Caroline, the nurse, cannot leave the infant. Instead, she disappears into another city to raise the child herself. So begins this story that unfolds over a quarter of a century – in which these two families, ignorant of each other, are yet bound by the fateful decision made that long-ago winter night. Norah Henry, who knows only that her daughter died at birth, remains inconsolable; her grief weighs heavily on their marriage. And Paul, their son, raises himself as best he can, in a house grown cold with mourning. Meanwhile, Phoebe, the lost daughter, grows from a sunny child to a vibrant young woman whose mother loves her as fiercely as if she were her own.

So bear with me here, because I’m going to go off on a rant:

David Henry: you gave your baby girl away, arbitrarily making a decision on behalf of your family without consult and go on to tell your family she died. You passed her in to the hands of your nurse and washed your hands of her. You held a memorial service, buried an empty casket and continued to tell your wife and later your son, the twin, that she was dead. Did not exist. He comforts himself with the “excuse” that his sickly sister caused so much heartache in his youth he only wanted to spare his wife from similar grief.

Caroline: you should have just left, he was explicit in his demands and therefore did not need to be informed in any way shape or form what you did. Ever. Even though you so strongly felt it was wrong that he was holding a memorial service for a baby that was not dead, that should have even further brought home the point that he did not want/should not be allowed to know of this child’s existence. I flopped back and forth between annoyance with Caroline for bothering with details, addresses and photos over the years – he did not deserve this and because of this, you also had a part in creating a disasterous marriage and family life from your consistent peeking in every once in awhile. Therefore, this shameful secret will never rest for David Henry. I understood up to a certain point why- but then to me it was more “screw you David” – you gave Pheobe a beautiful and fulfilling life. You found your own happiness. Without your intervention, Pheobe would never have enjoyed the life she had.

So here’s the part where I wanted to drive my car off the road: When twenty years later (following a disaster of a marriage, a disaster of a relationship with your son) you stand outside Caroline’s home marvelling at how much your daughter resembles you, the smile, the joy and you say “Oh, I’ve caused Caroline pain all these years, it is best if I stay out of way and their lives still.” You think? Seriously, you think announcing your presence after 20 years to a person that could not possibly grasp what was happening would have been a good idea? Why not at age 1 or 5 maybe, but the kids are in their 20s now. I was beyond irritated.

The dragging on of this story only served to annoy and frustrate me beyond belief. WHY and for WHAT reason was it by bringing in this 16-year-old, pregnant backwater girl you found squatting in your childhood home??? I was looking all around me when listening because it was a feeling of “what the hell did I just miss? Why is he tied to a bed?” Ridiculous!!! What purpose did this serve to the story? Oh, that you told this complete and total stranger what you did, brought her home, still did not tell your family the real underlying reason for bringing her to be in your home, continuing to isolate your wife and son and you just expected acceptance once again for your bizarro actions.

I had NO sympathy for you David Henry. And then you died. So, am I cold? Because this is where I was like, oh, well, I guess I’ll see what happens now! I do have to say that the way the ending was handled is what has changed my rating from a 2 to a 3. I was very glad that the ending unfolded as it did and that Pheobe was not ripped from her home and the only mother she knew, only slowly brought in to a tender relationship with Paul and Nora. 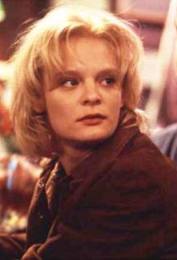 Martha Plimpton is the narrator. Allow me to rant just a little further. Her narration was sharp, harsh and very clipped. I felt as though she was poking me repeatedly in the chest every time she spit out a word. Her gruff attempts at male voices made me shudder. I had to shut it off a number of times here too just because I needed a break from her voice. It was suggested that perhaps this is why I was so bothered by the story, as the right narrator is soooo very important! Perhaps I didn’t enjoy it as much because the narration was rough? But no, I think I would still have been just as irritated by David Henry.

Moral of the story is that one wrong decision causes such guilt-ridden harm to all around you. I’m just pleased I’m finished listening to it.