Spoiler in this review!

I never thought I would see the day when I would recommend a movie over a book.  Since the movie did a pretty darned good job of creeping me out years back, I figured the book would be even more unsettling. Instead, it came across as borderline silly. Rosemary was such a meek wife that it became frustrating.  She could be talked out of every logical thought in her head.  I kept trying to put the book into context; was my frustration with Rosemary thanks to the date of the book’s publication?  In 1967, it was clearly ok to give endless details regarding how a housewife kept herself busy by shopping and cooking… it was ok to celebrate a pregnancy by “bringing out the ashtrays…” and it was ok to refer to every African American character as “a Negro.”  I tried continuously to put the book’s timing into perspective, but it didn’t help.  None of this was ok with me.  It drove me bananas.

That being said, I will say that Ira Levin paints a very clear picture (almost too clear — everything is explained for the reader in great detail), and the story itself is interesting.  But even if I had not seen the movie, the story is highly predictable, and I felt beaten over the head with foreshadowing.

Mia Farrow not only starred in the movie, but she also narrated the audiobook, which was an obvious choice.  She did a fine job, and brought life to all of the book’s bizarre characters.

And, at the end of the book, when Rosemary finally finds her backbone, grabs the knife and decides to burst in on the Coven to see what she soon discovers is Satan’s son, she still lets the reader down.   All that strength-mustering to become smitten with the devil-baby’s “cute little chin?”  I guess the yellow eyes, horns, tail and claws were easily overlooked.  Sorry — too hard to swallow.  2 stars.

Fellow Hoarders, cover your ears (eyes?), but I’m going to recommend the movie.  If you want to be disturbed by a remarkable performance by Mia Farrow, find a copy and grab the popcorn.  Mia will do a better job of making you shudder. 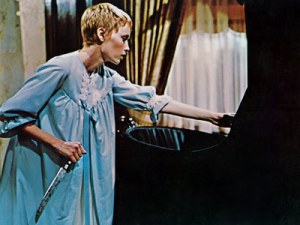 4 thoughts on “What the hell? Audiobook Review of Rosemary’s Baby”