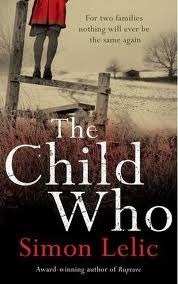 This book was chosen for the Opinionless Online Book Club’s March read. We also have the incredible opportunity to speak personally with Simon Lelic on a Sunday afternoon coming up the last weekend of March. You still have time to read and join! The Child Who is a quick read, and yes, it is a page burner. I do have to say I did find myself wanting to keep reading it, that sleep could wait just a tiny bit longer…http://www.opinionless.com/the-opinionless-authors-series-simon-lelic/

We tried to pitch it for our Wink 3 Book Club choice for March as well, but as soon as they found out it was about a child that killed another child, they wouldn’t touch it. Not a topic they wanted to read about.  However, The Child Who doesn’t really dish out any gory details and the fact that young Daniel killed a younger Felicity is really background material and not the center of this story.

So, perhaps I`ve seen too many Cold Case, Missing, or Law & Order episodes, and I`ve read many thriller, suspense, murder mystery novels, but I kind of had this one figured out from the beginning. Okay, maybe not the very last part, but kind of, sort of. But I`m not saying I didn`t enjoy this, no, not at all, because as I mentioned above, I did find myself always wanting to go back to it, to see what would happen next.

Jackie explains the story of The Child Who wonderfully in her review here. So I don`t need to go in to any explanations as to the why, who and where here. All I will say is that I struggled quite a bit with Leo. I tossed and turned my opinion of him around a number of times. I thought him stupid and foolish for some part of it- of course this case is too close to you and is destroying your family – so drop it and focus on your family and your daughter who is suffering at school, at home, with friends because of the sheer intensity and coverage this case is bringing to your home life.

Ellie was lost. Daniel was too. In failing one, Leo had sacrificed them both.

Then I would flip because I realized that Leo was the only one to care about Daniel, not the murderer Daniel, but the small, young frightened 12-year-old boy. And the reasons leading up to why Daniel did what he did.

He had been failed and failed again. That he had killed had been not just the crime but his parents`, his schoolteachers`, his social workers`, his peers`.

Personally, my opinion on this subject is that if you really want to read a fascinating story that explores and delves in to the background and environment leading up to reasons why a young kid would murder another, you should read Elizabeth George`s book What Came Before He Shot Her. I felt this was an incredible examination of how behaviour, environment and circumstances lead up to a child committing murder.

Although I didn`t anticipate fully the ending, I was very pleased with it. I liked that it was how it came to a close. But overall, the story itself was somewhat familiar and that is why I have given it the 3.5 star rating.

2 thoughts on “Review: The Child Who”