I think that I enjoy Miriam Toews’ style of writing a little bit more in my head than I do in real life. I was pretty excited to read this one because I did enjoy A Complicated Kindness and The Flying Troutmans. But the whole time I was reading all I could think of was—Meh! 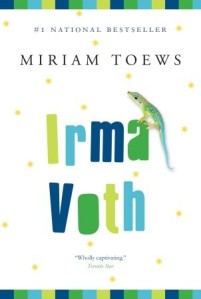 Meh! To Irma, a 19-year-old Mennonite girl disowned by her father for marrying a Mexican man. She is doing her best to be a good wife but she doesn’t have the brain power (she is not the smartest). After her husband leaves her (for the second time) she starts to work as a translator for a film crew that is in the area to film a movie about Mennonites. Her father begins to cause trouble for the film crew so Irma takes off to Mexico City.

Meh! To Diego, the director of the Mennonite movie. He only speaks Spanish but has hired a German actress to play the lead (I think she might have been kidnapped and taken to Mexico for the role but I am not sure). Irma is the translator hired to feed lines to the actress. Irma likes to completely change the lines from dramatic and philosophical to total nonsense (some of it is pretty perverted and funny!). The film ends up being critically acclaimed anyways (which I did not get).

Meh! To Marijke, the German actress playing a Mennonite living in Mexico. She is very melancholy because this role causes her to be separated from her son (that’s why I thought she was kidnapped). She is into meditation and new age thinking. She is sleeping with a film crew member.

Meh! To Irma’s little sister Aggie, a 13-year-old going on 25. She is a bit of a free spirit and will not listen to anything Irma says. She leaves her family home to stay with Irma before her father kicks her out (he is uncomfortable with his daughters once they grow up). She follows Irma to Mexico City and causes all kinds of problems. She eventually becomes an artist and likes to draw her dead sister Katie.

Meh! To Jorge, Irma’s Mexican husband who turns out to be a drug dealer and does not seem to like Irma very much.

Meh! To Wilson, a film crew member who Irma develops a crush on. He is a poet and is dying of a rare disease.

Meh! To Irma’s father who was “forced” to move to Mexico because of something he did in Canada (the secret in the book).

Meh! To Ximena, Irma’s new born sister who her mother gives to her before she runs away to Mexico City. She seems to be possessed by a demon or something—always crying and scratching at her face. She seems to live in a constant state of hunger and wetness.

Meh! To Noehmi and Dupont, the artist/hippies that Irma and Aggie stay with when they arrive in Mexico City. They just give them everything (job, money, food) and all they ask in return is for Irma to record her voice on tape for a play.

Meh! To Hubertus and Nathalie, bed and breakfast owners who let Irma, Aggie and Ximena live and work there without contributing anything. Kind? Yes. Smart? Not really.

The only redeeming character was Gustavo, the taxi driver that gives Irma and Aggie a ride to the ocean before they leave for Mexico City. He gives the sisters a chance to have a fun, easy-going day and a chance to act like kids, frolicking and playing in the ocean. He also gives them some life advice– live, laugh and be compassionate toward others. A good message, but a Meh book over all. I felt that it was a lot of “been there, done that” and done better in A Complicated Kindness. 2.5 stars.