Ruth Becker has entered an advanced old age and against the doctor’s prognosis of memory loss due to the onset of this age, she begins to remember more, not less of things that happened. “Clear as day.”

I had very good eyes once. Though it’s another thing to say what I saw. In my experience, it is entirely possible to watch something happen and not to see it at all. 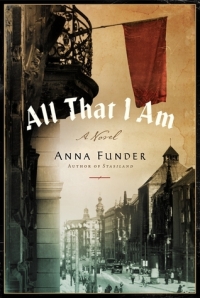 Ruth receives papers from 1939, it is a memoir from Toller, a significant person from her past, and the memories from this time come flooding back to her. The story is told in alternating perspectives/chapters with Ruth in present day, and Toller, the revolutionary playwright, in 1939. At the soul of this story is Dora. Dora is the common thread between Toller, her lover and Ruth, her cousin and whom is profoundly loved, treasured and remembered by both.

This alternating time span is something to always keep in mind and remember that each story/chapter is taking place over 50 years apart from each other. At times I found I was a bit muddled and had to remind myself that Toller’s story is from 1939 and Ruth’s is reliving, but in the present day. Toller is writing his memoirs at the tender age of 40, in the safety of a hotel room in New York City. Ruth receives these papers when she is quite old, to where she is currently living in Australia. Both are sharing memories of their shared political ties and of their moving loss and longing for Dora.

Toller, Dora and Ruth were members of the Independent Social Democrats that were fierce in their political opposition to Hitler. They were often tied to the Communist party and were therefore watched, other members were systemically executed, jailed, or forced to escape in to exile in other countries. They fought to expose what they knew about the Nazis and predicted the atrocities of “the little hysteric”, Hitler. The cover of this novel (pictured above) illustrates a defining moment in this story and is when Ruth hangs that red flag of the left movement, during a parade for Hitler at the time he is sworn in as Chancellor of Germany.

This is a point of view I have not read about or learned before. I have not read or known much about the opposing political groups that so fiercely fought against Hitler, or the methods that were in place in the early 30s to rid Germany of these opposition groups. Funder presents it very methodically and has obviously done a fair amount of research in to this. She  is also writing this story using real events and people. For instance, I did not know that originally the concentration camps were built to hold political opposers. And as Elizabeth’s review of The Zookeeper’s Wife mentions, the more you learn about the Nazis and their brutality, the more disgusted you are.

Funder writes with short, crisp sentences, and many of her one line sentences can take the breath out of you. So many are filled with poignance and beauty they make you stop and savour, especially those particular ones that hit you square in the heart.

So, as earlier mentioned, Ruth and Toller are remembering/writing of their political opposition and activity prior to 1939. As far as the main characters go, Ruth in her present time is a fantastic character. She is acerbic and sharp as a tack. She made me smile often. However, back in the day, she comes across as a bit of a follower and perhaps too star struck by her fanatically political cousin Dora. The more she remembers however, the more she confuses herself of what year she is in. She becomes completely lost in her memories. You do also wait until almost the end of hear of a bitter betrayal by Ruth’s husband then, Hans. It’s terrible and breaks your heart! Toller is a man that has risen to fame based on his imprisonment and the plays and speeches written during his captivity, and really, to the endorsement of Dora. He is however, a fairly quiet man with personal demons that perhaps is a bit “confused” or uncertain of the power he holds and of the influence he has on many. During this story we mainly hear of his great love for Dora.  Dora on the other hand, is a character that I struggled to like to be honest. She is a relentless political activist (no shame there) but she is “spoiled” in a way – she speaks of “free love” and doesn’t want children, marriage, wants to be able to be with any man she pleases, yet the same doesn’t hold for Toller. She’s prone to tantrums when Toller finds other women and when the focus on their political activity is not contributed solely to her actions. She is quick to point out her role in Toller’s rise to fame, the risks she takes to ensure Toller’s documents are saved. They are heroic, certainly, she has single handedly preserved this great man’s history and the role he played in trying to draw public attention to Hitler. But she just doesn’t hold that place in my heart as a true heroine, more like a finicky petulant know-it-all. But my opinion may be off as it appeared that Ruth and Toller felt as though they needed to protect her, make many assurances that they were not “leaving her”, as though she were a fragile object needing great care. Indeed she is written as a slight, and petite pixie-like character. Perhaps there is some meaning hidden there that I haven’t picked up upon.

This cover here to your left, is the version that I was reading. Note the girl with the red coat. Throughout the story, Dora is mentioned often as wearing a red coat. It was very “Schindler’s List-like”.

When I turned round she was already gone – halfway back along the carriage, walking briskly, shoulders hunched. Then she turned sideways and disappeared, a red coat swallowed by a grey crowd.

Therefore, both covers of this book show a significant detail noted in the story. (Just to bring a few things to your attention, if you will.)

I marked many, many passages in the book – I have little pieces of paper everywhere because there is so many interesting (and sordid) passages about Hitler’s reign and what he did to ensure the voice heard in Germany was only his own. He “de-nationalized” all political opponents, forcing them from Germany. Those countries that took them in as refugees had their visas state they were not allowed to engage in any political activity of any kind, in essence, Hitler did everything to ensure complete silence to any opposition to his rule.

In the beginning, immediately following the First World War, this book was very similar to the audiobook, All our Worldly Goods. It was similar in that the writing of the plight of the WWI soldiers was so exquistely written with such wonderful detail that I felt pain in my heart. Both books touched very heartwrenchingly upon the public’s feeling of the soldiers post-war – men to be hidden away, their heroism replaced with disgust. They reminded everyone too much of things they wished to forget.

“They are coming to assess whether he, Theo Poepke, can return to civilian life, or whether he will be sent for the foreseeable future to one of the secret military hospitals. This is not a health issue. It is one of morale: the authorities do not want the horrifically wounded to sabotage support for the war, to frighten women on trams.”

In the end, I was planning on assigning 3.5 stars to this book. Even though it was immensely interesting learning about the political resistance to Hitler and his ideologies, I felt that at times, I had to force myself in a way to continue reading. It wasn’t that the writing wasn’t well done, actually, the writing is gorgeous. It is simply that it didn’t drive me hard enough to keep wanting to pick it up. It is a fantastic story, there was that something missing for me.

And then, the last few chapters explode with greatness and I waffle now for that 4th star. Oh, but why did we have to wait until the very, very end to have everything come tumbling out – the settling of the “mystery” surrounding Dora’s death, the betrayal of Hans, the imprisonment of Ruth, etc. etc. A very, very powerful and wonderful ending.  Sigh! I’m waffling.

4 thoughts on “Review: All That I Am”