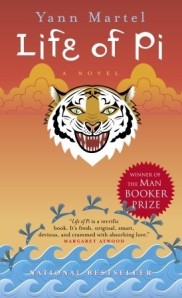 Can you be a better person because you read a book?

This is a story that I have been digesting for a few days.  I finished it almost a week ago, and am still enthralled by the question that is left with the reader. Yann Martel’s literary accomplishment has been widely recognized for years, with stellar reviews and the Man Booker Prize.  I’m a little late to the game. Shame on me for taking so long.

Life of Pi is many things.  It’s zoology… it’s adventure… and most importantly, it’s faith.

I’m sure you already know that Life of Pi is the story of an Indian teen who survives the sinking of a ship as it’s moving the boy and his family from India to Canada.  Indian political unrest forced the family’s move, and the family of Zookeepers from Pondicherry chooses Winnipeg for their new home.  They sell many of their Zoo’s animals, and decide to transport several with them on their voyage.  The ship sinks.  Pi manages to board a life boat… and winds up at sea with a zebra, a hyena, an orangutan, and an enormous Bengal tiger.  The zebra, orangutan and hyena do not survive.  Pi, and the 450-pound tiger, do.

The two are at sea for 227 days.  They have emergency water and food on the lifeboat, but not enough for their length of time as castaways.  Pi learns to fish, and he also manages to clean seawater with the provisions on the boat. He manages to keep himself and the tiger alive, but barely.

The lengths that Pi goes to to keep the tiger alive beg the question, why? Why sustain this on-board predator, when he consistently represents such a threat? The answer is crystal clear while you’re reading the story.  The tiger, also known as Richard Parker, is kept alive by Pi for the company that he provides. The threat of solitude is more frightening than death.

Pi, an incredibly spiritual youth, is a devout Hindu, Christian, and Muslim.  Why all three?  He discovered at a very early age that he just “wanted to love God.”  Who could argue?  Pi’s devotion to God, and his extraordinary intellect make him one of the most fascinating characters I’ve encountered in a very, very long time.  It’s impossible not to feel affection for Pi, his plight, and his hope.  Martel created a character so human, so complex, and truly — so innocent, he will warm your heart.

Martel has a gift when it comes to the art of description.  Thanks to his prose, you will see radiant sunsets at sea, will feel nourishment when edible algae is discovered, and will experience the discomfort of saltwater on your skin.  There wasn’t a scene that lacked detail.  Everything was communicated with grace and exemplary imagery.

A friend highly recommended the Life of Pi audiobook, and I’m so glad that I listened!  (Pun intended – sorry.)  Jeff Woodman reads the bulk of the novel, and his range is astounding.  He effortlessly moves between the accents of an Indian youth, to a French Cook, to a Japanese investigator.  His tones are beautiful, subtle, and they bring great joy to the story.  Hats off to Mr. Woodman for an incredible narration, and for breathing life into each and every character.

Overall, what struck me about this novel the most was the potential for the reader to miss the boat, so to speak.  I’d like to think that I didn’t, but perhaps this is a boastful claim.  I’d like to think that I heard Martel’s message loud and clear, and that his symbolism and the meaning behind his characters were not lost.  This is a story that needs to be read with an open mind, and an open heart.  Simply put, you’ll get out of Life of Pi what you put into it.  The question at the close of the book will either confuse you, or will inspire you.

Will you believe one story, or the other?

Will you lean toward the lyrical, or the rational?

Personally, I’m going with the lyrical.

Parting thought: Life of Pi will be released as a feature film in December 2012. I’m not sure how the film will properly encapsulate everything in the book, but judging by the photo below, it will certainly be worth a look. 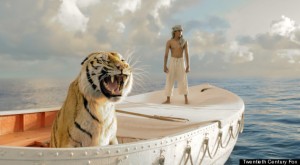