Well, that seemed like the longest 330 page book I have ever read! It sure took a long time for me to get into this one but FINALLY it seemed to come together with about 100 pages to go. I actually read 2 other books and started a third before I buckled down and made myself finish it today!! In the end, not my favourite, but not bad either!

Think about it. A bunch of German and American kids meeting up in Berlin and Paris between the wars to make all this wild, joyful music before the Nazis kick it to pieces? And the legend survives when a lone tin box is dug out of a damn wall in a flat once belonged to a Nazi? Man. If that ain’t a ghost story, I never heard one!

Summary from Goodreads: Berlin, 1939. A young, brilliant trumpet-player, Hieronymus Falk, is arrested in a Paris cafe. The star musician was never heard from again. He was twenty years old. He was a German citizen. And he was black.

Fifty years later, Sidney Griffiths, the only witness that day, still refuses to speak of what he saw. When Chip Jones, his friend and fellow band member, comes to visit, recounting the discovery of a strange letter, Sid begins a slow journey towards redemption.

From the smoky bars of pre-war Berlin to the salons of Paris, Sid leads the reader through a fascinating, little-known world, and into the heart of his own guilty conscience. Half-Blood Blues is an electric, heart-breaking story about music, race, love and loyalty, and the sacrifices we ask of ourselves, and demand of others, in the name of art.

This book was told from quite a different perspective than most books written about this time period. The blacks certainly did not have it as bad as the Jews in Nazi Germany but, depending on their degree of blackness and their cultural background, they were also imprisoned, deported or even killed just for being black. Hiero (The Kid) was a half black German with a darker complexion. He was a brilliant trumpet player with talents to rival the great Louis Armstrong. The band manages to help him escape from Germany into France at the start of the war but he does not have the same luck getting out of Paris. The story shifts from war time Germany and France to the 1990s when Hieronymus Falk develops a cult following. His old bandmates, Sid and Chip, now in their 70s, are asked to participate in a documentary about The Kid which it starts an adventure that will end with a surprise reunion.

The most impressive part and the most annoying part of this book was the language! Esi Edugyan DEFINITELY gives you the feel of being a part of the underground jazz scene circa 1939– with all of the slang and terms of the time you would swear that you were there! But, for me, the bad grammar and phonetic writing got a little old and only made me tired as I read. It also totally got me lost in the first part of the book. I was especially confused about where they were (Paris or Berlin), who was with who and what actually happened the day Hiero got taken away by “The Boots”. In the end everything suddenly came tumbling together and I was finally able to understand what happened at the beginning because of it.

The characters themselves were a pretty unlikable bunch (but I am thinking that was the intention). Sid seemed to be a Jealous Jenny– always comparing himself to The Kid who was a WAY better musician than he was. He was selfish to a fault and in the end it got his pal trapped in Nazi occupied Paris. His relationship with Delilah confused the heck out of me because I never really felt that she liked him very much. Chip was also confusing– he was written to be a womanizing “jack” but never really seemed to have a “jane” around to please– all talk and no action it seemed. He was shady and (again) selfish and was the only one of the group to continue playing music as a career. Delilah was the “love interest” for both Sid and The Kid. Even though deep down I felt she had the strongest heart and smartest head I thought she came across very weak– she seemed way too eager to please the stupid, sex-crazed men that she was taking care of. The Kid was, by far, the most likeable character there was. Your heart definitely went out for him– he was so young and so much was was on his shoulders being touted as the next Armstrong. I would have liked to have found out a little bit more about what actually happened to him but I guess that is why they made the documentary– who wouldn’t be intrigued by The Kid??!

This was a unique book worthy of winning the Scotiabank Giller Prize for Literature. There were moments of pure brilliance in Edugyan’s writing– from her description of the masses fleeing Paris to the eeriness of the empty city afterward and as our friend Michelle from A Reader and A Rider pointed out she wrote in a very believable voice of an American man from the south (see her awesome Goodreads review here). This one also received a whopping 5 star review from our pal Aaron at Opinionless. For me, 3 solid stars despite the false start! 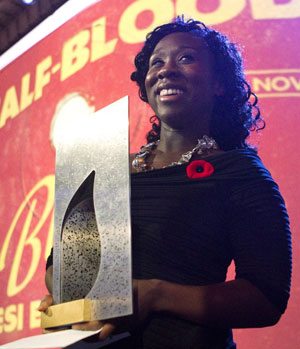 2 thoughts on “Review: Half Blood Blues”