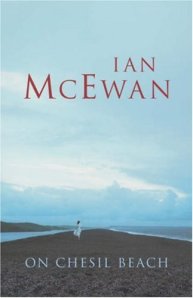 I have to start this review by saying that if the audiobook had not been due back to the library, I’m certain that I would have popped the first disc back in.  I wanted to hear it all over again.  I wanted to absorb more.  Or perhaps, I just wanted to listen to the voice of the author for just a little longer.  All of these are distinct possibilities.  Actually… all are true.

Superbly read by Ian McEwan himself, On Chesil Beach falls across your ears like silk.  I can’t say enough about Mr. McEwan’s narration.  His soft-spoken tones… his inflections… his innate knowledge of the characters… they all come together beautifully, and they flow seamlessly over the course of the sad tale.

It is 1962, and the story is about Edward Mayhew and Florence Ponting, (ages 23 and 22 respectively), who have come upon their wedding night at a hotel on the Dorset Coast.  While Edward is most anxious to finish dinner and retire to the bedroom for the consummation of their new marriage, Florence is nothing short of terrified.

Where he merely suffered conventional first-night nerves, she experienced a visceral dread, a helpless disgust as palpable as seasickness.

How can a novel be about a single evening?  How can there be enough substance from this one disastrous night to propel a book forward, and shed light on its lifelong consequences?  The answer is simple: Ian McEwan.  Only Mr. McEwan could capture the innocence, emotions, and astounding lack of self-awareness that this couple possessed.   Only Mr. McEwan could describe an argument so agonizing, that the reader (or listener) might wince repeatedly with its progression.  (Ok – perhaps that was just me.  But it was a torture. The couple, so naive, just didn’t know how to argue.  It reminded me of two people attempting a waltz, after missing all of the opportunities that they had for dance lessons.)

It was remarkable how the clumsy interactions of this couple became the defining moments in both of their lives.  The story pointed to how powerful such moments truly are.  Arguments don’t necessarily roll off of one’s back. Actions aren’t necessarily forgotten over time.  Moreover, if you leave something unsaid or untouched, it can cast a shadow that’s as long as your lifetime.  Edward and Florence were restrained by their innocence, their upbringing, and the social limitations that were so prevalent at the time.   Undoubtedly, had they felt able to freely express their fears and their needs, the book surely would have had a much different outcome.

This author has been described as the “master of the defining moment.”  On Chesil Beach is yet another testament to his great talent.  Ian McEwan proves wholeheartedly that “doing nothing” at a profound moment can impact your entire life.

Thank you for your insight, Mr. McEwan!  4 stars for On Chesil Beach.

One thought on “Audiobook Review: On Chesil Beach”