This was one of my picks for our NetGalley Knockdown Challange and I have to say I sure lucked out in picking it! Thanks so much to NetGalley and Random House for allowing us access to read this beautifully written debut novel by Carol Rifka Brunt! 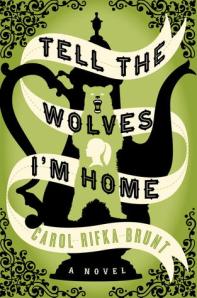 It is 1987 at the height of the AIDS crisis and 14-year-old June’s favourite uncle, Finn, has been diagnosed. This means he will die– no doubt about it. Finn is June’s mother’s brother. They used to be close but now they have a strained relationship– he has done many things that she doesn’t really agree with– but they are cordial to each other. June absolutely ADORES Finn and would like to spend as much time with him as she possibly can before he passes away. Finn comes up with a project so that they can do just that. He is an artist and will paint a portrait of June and her sister Greta– it will be his last gift to his family as well as his last professional gig.

June is just a MAGNIFICENT character– she is so real. You want to hug her to pieces and tell her “life won’t always be this hard– being a teenager only sucks for a little while!!”. She lives in her own little world somewhere between child and young adult. She spends most her time alone hanging out in the woods– she’s the quirky girl wearing the medieval boots and Gunne Sax dress dreaming of becoming a full-time Falconer at a Renaissance Festival some day. She used to share this world with Greta but now that she is 16 she finds June babyish and constantly makes her feel stupid– especially about her feelings towards her uncle. June tries not to let it bother her but it does. Uncle Finn is the only one who has ever understood her completely, and he is dying.

(It is hard to remember that at one time that AIDS was considered to be the new leprosy– this book just TRANSPORTS you back to that time. June and Greta are actually afraid to admit that their uncle died of AIDS at school because they are worried they will get the “Ryan White” treatment!  It is amazing how far we have come in treatments and understanding of this disease! So great that being HIV positive no longer means an automatic death sentence.)

That’s what I want for you,” he said. “I want you to know only the very best people.”

Uncle Finn dies soon after the portrait is complete and June is just DEVASTATED. She feels that she will never love again and that no one will ever understand her grief. But she soon finds out there IS someone else. Two weeks after Finn’s death she receives a package. It contains the Russian teapot with the bears on it that Finn always used when they came to visit– it is something that she has always admired. The note that comes with it is from Finn’s special friend, Toby. It also contains an invitation. June has never heard of this special friend so she covertly asks her mother for some information. The reaction is very strong and very negative. She seems to blame Toby for every wrong thing that has ever happened in Finn’s life– the choices he made, the company he kept, the disease he got. All June could think was “if he was so special, why have I never met him?” and her decision is made. She would say yes to the invitation and let this Toby guy know who Uncle Finn REALLY was! Only, he seems to know a lot more about Finn that she does. An awkward love/hate relationship begins between June and Toby as they come to terms with the death of their all time favourite person. And June begins to grow up (but just a little bit!).

This is another one of those stories where you just don’t want to say too much because June’s journey needs to be experienced first hand! You’ll laugh, you’ll cry! Awesome, AWESOME story telling, fantastic characters! Can this REALLY be a first novel?? Great Job!! 4 stars for me!! Can’t wait to hear more from this author!

(This song was in my head the whole time I read for no other reason than it had wolf in the title– great song tho– thought I would share.)