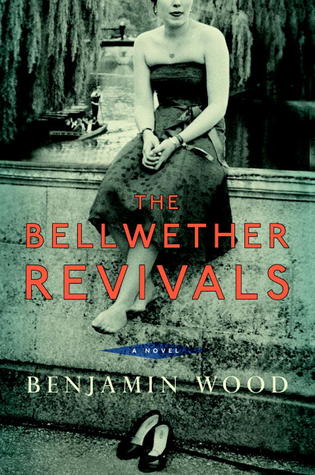 The Bellwether Revivals opens with the caterwaul of sirens as paramedics arrive to a smoke-filled scene littered with 3 bodies and 1 barely clinging to life. They are pointed out by another group sitting outside waiting for the police.  The 3 bodies are not identified, nor is the group of people sitting outside. The only identification is of the person barely breathing, Eden Bellwether. Eden is identified by the only other person named in the prologue of activities taking place one night in 2003, and he is Oscar.

The first chapter opens with Oscar as narrator, obviously building the story up to and including the prologued events of 2003.

My thanks go out to Net Galley and McClelland & Stewart for the opportunity to read The Bellwether Revivals. This is now my 3rd tackled for the Net Galley Knock Down! (and sorry, it’s coming later, as I read I think 3 other books in between finishing this one.) (another aside, it sort of tells you how easily I put this one aside to read the others before picking this one up again.)

A bellwether is any entity in a given arena that serves to create or influence trends or to presage future happenings.

The term is derived from the Middle English bellewether and refers to the practice of placing a bell around the neck of a castrated ram (a wether) leading his flock of sheep.The movements of the flock could be noted by hearing the bell before the flock was in sight.

The definitions provided for a bellwether are quite fit for the story that unfolds between the pages. And I’ll just say upfront, this wasn’t a favourite of mine although it held such promise based on its description. I must say I endured and battled on to finish. 😦

The Bellwether Revivals centres upon 3 main characters, with other characters contributing but it is very focused on Oscar, Eden and Iris.

Oscar: is the main character that sits on the outside of the priviledged life of the Bellwether’s. Not a Cambridge attending elitist, but a nursing home employee with working-class parents. On the Bellwethers, Oscar says:

Iris:Iris is a Bellwether that Oscar is fascinated by and in love with. She is very obviously not the favoured Bellwether like her brother Eden and flip-flops between declaring him mad and enlisting Oscar’s help to believing Eden is extraordinary, special and truly has these healing powers.

Eden: suffers horribly from Narcissistic personality disorder. An extreme snob, elitist and ultimate narcissisist. Eden feels he has the power to heal people through hypnotism and music and has subjected himself upon Iris countless times throughout their childhood and in to present adulthood. He is unfortunately the family favourite and whom Iris is convinced is crazy. Iris enlists Oscar to help her prove that Eden is insane. using music and hypnotism. He’s despicable and I was not at all interested in reading about his behaviour which was bratty and self-absorbed.

Oscar, poor Oscar becomes but a pawn in what increasingly seems to be a dangerous game in which Iris and Eden play – almost like something they’ve done since childhood and Oscar is the unfortunate victim this time around, with disasterous consequences. Eden continues to unravel and his behaviour becomes increasingly erratic and bizarre. As this occurs, his parents pull the “we can’t let the neighbours know, for what would they think” attitude and disassociate themselves from believing he needs help and work to cover up his insanity. The ending reveals the mystery written in the prologue, the identities of the bodies and the subsequent courtroom drama complete with a “shocker” (not really) tossed in the end.

Throughtout the novel, themes are heavy on music, God, religion and philosphy. Unfortunately, for me it was very, very repetitive, page after page described the same behaviour and crippling narcissism in Eden and all of his charades. I simply could have cared less. The entire time I was reading this story, this was the movie that played continuously through my mind, The Talented Mr. Ripley: (so I suppose you could assume that it is something that was done and read before.)

Substitute the two lovers with brother and sister with the brother being insane and it was simply an image that would not leave me. I pictured Iris as Gwennie, Eden as Jude and Oscar as Matt.

Sigh, I felt this had such great promise, but I struggled through it and hurried to the end just so I could uncover the mystery written in the beginning and put my mind at rest. 2.5-3 stars for me.