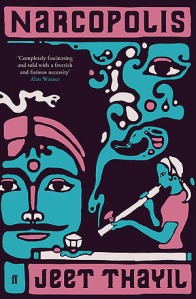 I have just emerged from Jeet Thayil’s drug-ridden nightmare, and I have to say that I’m pleased to be back.

Longlisted for the 2012 Man Booker prize, this novel is an unflinching exploration of the underworld of Old Bombay.  Hookers, pimps, street vendors, pushers, artists and eunuchs litter the filthy streets.  Dogs run in packs, murderers prowl dark corners, and opium dens are routinely busy with varying sorts of clientele.  In short, life on Shuklaji Street is a misery, but its residents know no better.  There are no loftier expectations.

I must start the review by admitting that I was tainted by the novel’s prologue.  The book got off to a poor start with me, because it was a 7-page sentence.  That’s correct; a run-on sentence that stretched for 7 pages, exhausting the use of the comma.  Truly, there’s an effective way of communicating a stream of consciousness while simultaneously employing the period.  A period gives the reader’s mind a breath.  It permits one to digest.  This is especially important if you wish for your reader to fully grasp a world that is unthinkable, and detestable at best.

Thankfully, the novel discovers proper punctuation in the first chapter, and the journey begins.  Looking back to the thriving opium dens of the 1970s, Narcopolis offers a clear and often brutal glimpse into the hazy experience of a drug induced nod.  The characters are not personable, but each has his or her own plight.  A female prostitute (who used to be male) was the book’s most emotional figure.  “Dimple” never seemed to question her plight, which therefore gives the reader ample opportunity to do it for her.  She seemed to be the most human of the characters, demonstrating loyalty and regret.

She stared upwards without blinking and the thing he would remember later was the look in her eyes, there was no light in them, not even the reflected light of the streetlamp.  He thought: this is a woman who understands death.  She has tasted the meat of it and it pleases her.  The thought frightened him and he walked past her without stopping.

Dimple is surrounded by savagery, yet it does not faze her.  I would suggest that this was a form of self-preservation, but it’s also obvious that she is not afraid of her fate.  People enter her life.  Some affect her, others do not.  The book explores some of these people more than others, and the result is often a fleeting portrait of a pimp, john, student or criminal.  The book’s opium pipes were characters as well, oddly enough, as they moved from user to user.  It may strike you that the pipes are offered greater care than almost all of the book’s inhabitants put together.  They also last longer.

Jeet Thayil writes with great purpose.  While the subject matter is unpleasant from start to finish, Narcopolis does an impressive job depicting an unholy time in Bombay.  Readers will surely come away from this debut novel understanding a very base side of life; one which makes no apology or attempt to make circumstances palatable.  It’s not an easy read, but at the same time, it’s a powerful novel of observations.  Needless to say, it does not pull punches, and does not offer the reader a break.  When hallucinations are your characters’ best moments, you know that the resulting story will revolve around chaos.

Overall, I can’t say that I enjoyed this book, but I would be remiss if I did not commend the prose.  The altered state of Narcopolis is interesting, but is not something that I would seek in a novel again.