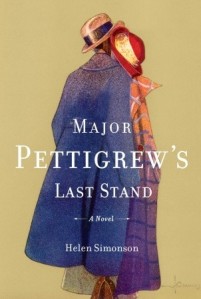 I’m late to the Pettigrew game.  I can’t say why it took me so long, but I believe that I now might be a happier person because I have recently gobbled up this book.

I can’t recall the last time I encountered a story that was this delightful.  While it is characterized as a love story, it felt like more.  It was a character study, a stand against small mindedness, and a truce between generations.  Open this charmer and you’ll find yourself smack in the middle of Edgecombe St. Mary’s; a very small village tucked in the English countryside.  Stay for a few moments, and you’ll encounter Major Ernest Pettigrew: retired military man, opinionated chap, and proper gentleman.

The Major, a widower in his late sixties, lives a most respectable and modest life.  A good day may be determined by the quality of his afternoon tea.  He longs to shoot fowl with the local aristocrat.  He wishes for young people to have a sense of duty.  He grumbles over people’s manners (or lack thereof).  He’s wry, witty and very often left incredulous by his surroundings.   By all accounts, he will steal your heart, and I predict, will quickly be among your most endeared literary characters.  He’s certainly now among mine.

While the Major may come across as an intolerant soul, the truth about him shines as he falls for the Pakistani shopkeeper, Mrs. Ali.  The afternoons they spend together are poetic.  Their mutual appreciation of good manners, literature and their quaint village make them an obvious match.  The relationship, however, presents a bit of a quagmire.  While it is clear that the Major and Mrs. Ali are growing to love one another deeply, they must simultaneously navigate through the waters of bigotry.  Village inhabitants, and members of their own families, are just not ready to see the two together. Yet, no one can handle the situation better than the Major and Mrs. Ali.  The even-handed way the couple cope with modern ignorance is inspiring.  Truly, if good manners are employed, wouldn’t everyone get along?

Swirling around this village romance are a host of fascinating characters.  From the Major’s materialistic son to Mrs. Ali’s duty-bound nephew, there is no shortage of people to keep the reader engrossed.  Some of them will elicit anger, some will cause bursts of laughter.  An excellent book offers the reader the opportunity to understand and connect with multiple people.  I promise that Major Pettigrew’s Last Stand does this, and more.

I also promise that when Major Pettigrew’s stand is taken, you will swell with emotion.

I now miss the characters terribly.  I feel like I was among friends for a lovely, long time, but now must move on.  Perhaps I’ll just have to listen to it again one day.

Now it’s time for me to swoon over Peter Altschuler, the extraordinary gent who narrated this audiobook.  If I have one recommendation, it would be to reach for the audio version of this novel.  Mr. Altschuler becomes the Major, and delivers the character’s remarks and observations with searing honesty. At times, his intonation and delivery are downright hysterical.  I believe wholeheartedly that one of the reasons I gave this novel 5 stars was because of Altschuler’s brilliance.

Bravo!  What a performance.