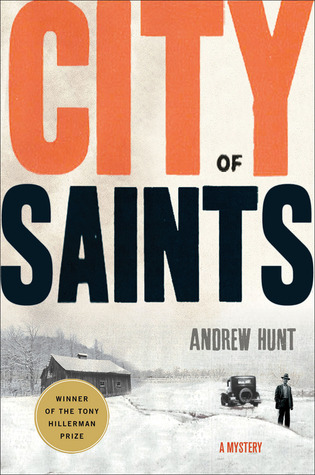 Many thanks to Audiobook Juke Box and AudioGo for providing a copy of this audiobook.

City of Saints is another name given to Salt Lake City, Utah, land of the Mormons. It is a cold, snowy, early morning, 1930, and a violent, merciless murder has occurred. (Only after did I discover that this is based on a true murder mystery, one that remains unsolved all these many years later!) Salt Lake County Deputy Art Oveson and his brash partner attend a reported crime scene and discover a woman left dead in the snow. The whole scene depicts the vengence and hatred that was acted towards this unknown woman. Run over as many as seven times, every bone in her body broken, one eye missing, it is truly a horrific and disturbing scene for the officers to come upon.

Over the course of Deputy Oveson’s attempt to solve the murder of Helen Kent Pfalzgraf, wife of highly-esteemed, and very wealthy Dr. Pfalzgraf, corruption, cover up and greed abound. Working to compound the situation is a Sheriff running for re-election all to willing to turn away any attention from Dr. Pfalzgraf following his sizeable donation to the Sheriff’s campaign.

But Art Oveson knows something stinks something rotten in Denmark, or, Salt Lake City in this case. Oveson actually comes from a long family line of cops – his grandfather, his father – a highly honoured officer killed in the line of duty, and every single one of his brothers. For Art, law enforcement isn’t a choice, it’s an expected line of work. Art is also “affectionately” known by his foul-mouthed, abrasive partner as “Saint Art, Choir Boy, Boy Scout, Officer Squeaky Clean, etc.” due to his immensely squeaky clean lifestyle. Art doesn’t swear, is a faithful and devout Mormon, doesn’t drink, won’t drink coffee and above all loves his ice cream, his wife and his family.

After a particularly quick and tidy supposed close to the case, with the suicide of one of Helen Pfalzgraf’s many beaus claiming guilt, Art continues to dig to get to the reality of the situation. Why is Dr. Pfalzgraf so heavily guarded? Why has there been a series of particularly brutal murders following the close of Helen’s case? Why was his partner targeted? Did Helen’s lover really commit suicide or was that a set-up?

Sifting through layer upon layer of the case, Art comes upon much corruption, cover-up and stall tactics, yet he remains determined to get to the bottom no matter how intense the fear for his own life. The whole story is a very smart and snappy little caper that comes to a very satisfying finish. I particularly enjoyed how Mr. Hunt wrapped up the very end of this story. Not only does he take the time to provide all the details to wrap up the story nicely, he also takes the time to bring us back to the beginning, to the person behind this entire case, and pays homage to Helen Pfalzgraf. Mr. Hunt hasn’t let the readers forget her, to let us remember that she was a bright, beautiful young woman that walked the earth and held her own dreams. Nice touch Mr. Hunt to bring us back to the reason for the mystery in the first place. Helen wasn’t callously cast aside to forgot the true reason for this murder mystery.

Now, this was provided as an audiobook, and I feel I have to be honest here, that although as the story went on I became more accustomed to the narration handled by Richard Waterhouse, in the beginning I wasn’t overly thrilled with it. In the beginning his narration sounded quite stilted, almost amateurish, I suppose? His narration of the female voices left me laughing out loud, and not in a good way. But like I mention, as the story went on, I was no longer put off by it. I’m not sure I would recommend listening to this, but I most certainly do recommend reading it! (and in any format you choose.) City of Saints was the winner of the Tony Hillerman Prize  for best first novel and was a very worthy win! I truly enjoyed this one.