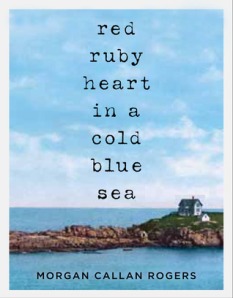 I’m not typically one for coming of age stories.  I had, however, read a positive review of this debut novel, so when it popped up at my library, this Hoarder couldn’t resist.

Red Ruby Heart in a Cold Blue Sea follows the adolescence of Florine Gilham; a girl whose world capsizes when her mother vanishes. Florine, her heartbroken father Leeman, and her grandmother Grand are all that’s left of this little family unit.  It goes without saying that no 12-year old who idolizes her mother should experience this kind of loss.  At first, I thought that the book was turning into a whodunit, and I was anxious to discover what happened to Florine’s mother. Alas, the mystery this book offered was not what happened to the missing woman.  Rather, it focused all attention on the mind of a bitterly confused teen.

Interestingly, it was only a matter of time before more heartache would introduce itself to this strong-willed and increasingly angry girl.  Your job as a reader is to watch idly as the rawest of emotions knead this teen into a mass of hurt and longing.  All of this emotion is written extremely well by Morgan Callan Rogers.  Rogers has a talent for capturing honest dialogue and relentless angst.  Prying into the mind of any teen would be a trial, but looking in on one who is repeatedly disappointed by the injustice of life is borderline exhausting.

It’s the hearken-back 1960s, and this coastal Maine town has every charm of an idyllic small community. This is Florine’s haven, and no snow-covered tree branch escapes her notice. While the mystery of her mother’s disappearance stretches into years, Florine manages to find solace in the consistency of her surrounding fishing village, her 3 best friends, and her darling (and most patient) grandmother, better know to the entire town as Grand.  After mulling over the characters of this novel, I would have to say that I found Grand to be the most impressive.  Her strength, humor and capacity to love were all enviable, and her presence made the story richer.  Everyone needs a Grand.

After Florine’s father Leeman moves on with a new romance, Florine moves in with Grand, and angrily watches her father and his new girlfriend from across the street.  Her father’s girlfriend Stella (an old flame from his younger years), quickly becomes Florine’s emotional punching bag.  This was certainly understandable at first, but as the years passed, I have to confess that I was anxious for Florine’s maturity to kick in.  It didn’t.  And while Florine’s moods ebbed and flowed, the patience of the people around her grew exponentially.  There wasn’t anything Florine could do or say to push that final button on her recipient.  They kept coming back for more, and patiently waited out the anger.  What a world it would be if everyone we knew could endlessly wait out our tantrums.  What a world it would be if people’s only expectation of us was to be happy.

While I enjoyed this read very much, it was this chronic immaturity of the protagonist that made me remove a star.   Florine’s endless self-pity, jealousy and confusion became frustrating.  I wound up disliking her.  That’s not to say that I didn’t appreciate the novel’s power to stir emotions; I did.  But, typically, I like to like the main character.  Not so, this time.  Did she experience terrible losses?  Yes – they were awful.  They would throw anyone for a loop.  Eventually, however, the hope is that the old adage kicks in that what doesn’t kill you makes you stronger.  In this case, it didn’t, and Florine too often came across as a spoiled brat.  Coming of age stories usually mean that someone comes of age.

Regardless of my frustration with Florine, Red Ruby Heart in a Cold Blue Sea is worth the read.  The novel’s people are developed effectively, and the story sustains an emotional investment on the part of the reader.  Perhaps your sympathy for the main character will last right until the end of the book.

If this is the case, then you clearly have the kind of patience that was exemplified by the loved ones of Florine Gilham.  And that’s an inspiring way to be.

This audiobook was narrated by Luci Christian, and she did a marvelous job.  Her voice talents matched the characters beautifully, and she captured Florine with grace and ease. Well done.