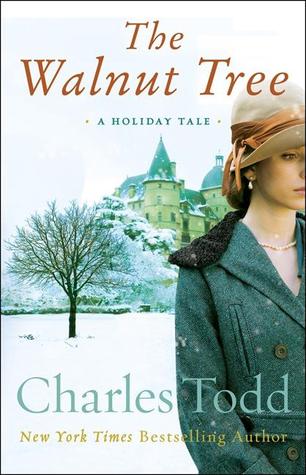 Thank you to William Morrow and Edelweiss for advancing a copy of The Walnut Tree. It’s a novella occurring during the Great War and promised a cameo of Bess Crawford from Charles Todd’s Bess Crawford series. It was marketed as a holiday book and became available at the very end of October. Indeed, I was able to enjoy it over the Christmas holidays. And it was also something I enjoyed in one sitting as the weather outside was very frightful, with blowing snow and howling wind all day long. What a delightful way to spend a day curled up under the quilts reading! This was another perfect read for just that type of day too.

Lady Elspeth Douglas, Scottish royalty and daughter of an Earl, is beckoned to her school friend’s house in France just as the war is starting top grow in intensity for the French. She has promised to stay with Madeleine until her first child is born. Madeleine’s husband is being sent to fight along with Madeleine’s brother, Alain Montigny. Handsome and dashing Alain is someone that Elspeth has long had a childhood crush on. Now that Elspeth is matured, Alain is returning the feelings. On the eve before his departure he has stated his intentions to her and will write to her Uncle, her guardian as soon as he is able.

As the war rages ahead, Elspeth feels she must make her way back to her home in Cornwall, but becomes trapped among the fighting and spends her time helping the wounded in any way she is capable. While in Calais, she meets another childhood acquaintance, Captain Peter Gilchrist, who ensures her safety and comfort as much as he possibly can. Feelings begin to rise within Elspeth for Peter and she becomes quite confused as to what she truly feels for Alain and for Peter.

Lady Elspeth, taken by the nursing she helped with decides to go against her station and sign on for nursing school where she become a Nursing Sister. This is done completely in secret from her Uncle Kenneth and she never uses her title in any of the application forms. For once she feels free of her title and that she has accomplished something independently.

While working with the wounded she finds out that Alain has been captured as a prisoner and is severely wounded. Peter is also severely wounded and she fears may die from infection. Can she live in a world without Peter? What of her promise to Alain? Her feelings for Peter are growing stronger and she questions if these are the same kinds of feelings for Alain? Whom will she choose and settle her heart with?

Charles Todd also introduces Bess Crawford, and her landlady Mrs. Hennessey of their Bess Crawford Series. Elspeth rooms with Bess in London and at times works side by side with her. A nice touch to the story. There is also just a tiny hint of mystery as Elspeth questions what appears to be theft of paintings when she happens upon the same man she sat next to on a train and runs in to him a number of times, always carrying a wrapped brown package. This is only a small hint of the story though as it is quickly solved and set aside and only mentioned briefly.  Todd also uses the floating hospitals in the story, as they did in the Bess Crawford Series. That series was the first to bring my attention to that and I enjoyed hearing of it once again in The Walnut Tree.

Alain is still missing and Peter is being released in to Elspeth’s care. A fellow nursing sister has offered Elspeth her mother’s cottage in Sussex as a place of respite and she takes Peter there to rest and recover. There, their love develops and yet, Elspeth still struggles with her feelings for Alain. Outside of the cottage is a beautiful walnut tree and is a source of comfort to both Peter and Elspeth.

Elspeth receives word that she is to return at once to France, as Alain is home and in great despair. She leaves without hesitation or information to Peter and finds Alain in a very depressed state. What will happen for Elspeth? Will she neglect her strong and true feelings for Peter or maintain her earlier promise and remain with Alain? I’ll not tell, you must read and discover for yourself.

This was a wonderful and quick war-time romance to lose yourself in while relaxing by the fire as the howling winds and swirling snow carried on outside. A perfect escape on a blustery,wintery day. 3.5 stars.