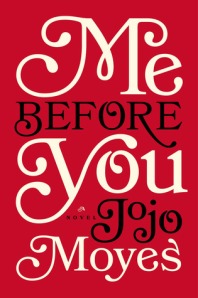 First of all a GIANT THANK YOU to Rebecca from Viking/Penguin for generously sending us not just one but THREE copies of Me Before You by Jojo Moyes! Now everyone in our Wink Three Book Club can have a good cry! Although this one is bit of a chick-lit read it is NOT a romance novel. It is more of a love story if anything– with a twist.

It is 2007 and Will Traynor is a hot shot business man. He has a Go! Go! Go! lifestyle, a smoking hot girlfriend and a designer apartment in the heart of London. He spends his weekends skiing, bungee jumping or travelling the world and he loves it! But everything changes for Will when he gets hit by a motorcycle on his way to work and becomes a quadriplegic.

Louisa (Lou) Clark is a quirky but simple girl who hasn’t done much with her life just yet. She works at a local restaurant and she really enjoys spending time with her customers– she sees them as a family of sorts because that is the kind of gal Lou is– her world is small. She is 26 years old and has never been anywhere far from home. She still lives at home, in the smallest room of the house and is comfortable with her boyfriend of seven years (Patrick, a former fatty who is now a marathon runner). Lou’s world is turned upside down when the restaurant abruptly closes down and she finds herself out of a job. She goes to the local job-seeker office where they suggest several things she is qualified to do– chicken farmer, pole dancer, adult chat-line supervisor aaaaand — personal care assistant for a quadriplegic– who happens to be Will.

With reservations Lou takes the job– it is only a six month contract, it pays well and she soon finds out why– Will is a bit of an a$$hole. He is moody, superior and insulting. His prickly behaviour often reduces her to tears. She finds ways to avoid being in the room with him and even considers quitting– but she really needs the money. Their relationship begins to blossom when Lou discovers that challenging and defying Will works better than crying and cowering. As she spends more time interacting with him Will realizes that Lou is homey and timid because she has never been given the opportunity to shine. They become each others’ pet projects. Will introduces Lou to his intellectual and worldly life before the accident– books, music and travel– and Lou introduces Will to enjoying the small things– laughing, nonsense and spending time with friends. A perfect recipe for LOVE– but it is not that easy.

There is another reason Lou has only been hired for six months. In addition to helping Will out with everyday tasks like eating and cleaning she has also been handed the task of cheering him up. Not just cheering him up, but cheering him up to the point that he no longer wants to take his own life. That is the twist. Will has been in contact with the assisted-suicide company Dignitas— he cannot cope with life in the wheelchair and has chosen to end it all. Lou has only 6 months to give him something to live for. Will she be able to do it??

For the most part the story is narrated from Lou’s perspective as she gets closer and closer to the deadline. The banter between Lou and Will was fantastic– the way they went at each other was charming and made me love them both– warts and all. There were also 4 chapters from 4 different perspectives (Will’s mother Camilla, Will’s physiotherapist, Nathan, Will’s father, Steven and Lou’s sister, Kartina) which provided a cool voyeuristic insight into the whole Lou-Will relationship which really added to the story. 3.5 stars (almost a 4 but the banter slowed down as the deadline arrived and that took away a bit of the charm for me– but it did NOT keep me from bawling like a baby). Looking forward to Book Club night on March 21st!! Hope everyone else enjoys it as much as I did!

I stole a look at Will. He was rapt, suddenly unselfconscious. I turned away, unexpectedly afraid to look at him. I was afraid of what he might be feeling, the depth of his loss, the extent of his fears. Will Traynor’s life had been so far beyond the experiences of mine. Who was I to tell him how he should want to live it? ~ Lou

2 thoughts on “Book Review: Me Before You”