The cover of this book implies that this is a story of espionage.  It isn’t. 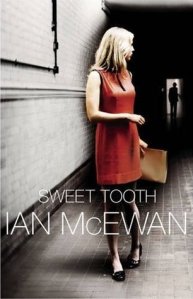 Sweet Tooth is authored by the remarkable Ian McEwan, whose writing never fails to be breathtaking.  His legions of fans would agree that few have mastered the English language as well as McEwan, who can take a simple thought and turn it into poetry.  When it comes to the quality of the writing, Sweet Tooth does not disappoint.  McEwan pens his story magnificently.

My personal disappointment with Sweet Tooth was with the protagonist, Serena Frome.  When I started this audiobook, I believed that I was embarking on a spy’s journey; something akin to the marvelous The Time In Between by María Dueñas.   What I soon came to discover was that Sweet Tooth was nothing of the sort.

Cambridge student Serena Frome’s beauty and intelligence make her the ideal recruit for MI5. The year is 1972. The Cold War is far from over. England’s legendary intelligence agency is determined to manipulate the cultural conversation by funding writers whose politics align with those of the government. The operation is code named “Sweet Tooth.”

Serena, a compulsive reader of novels, is the perfect candidate to infiltrate the literary circle of a promising young writer named Tom Haley. At first, she loves his stories. Then she begins to love the man. How long can she conceal her undercover life? To answer that question, Serena must abandon the first rule of espionage: trust no one.

Sweet Tooth bears absolutely no resemblance to this tantalizing description.  Serena is far more interested in the attention paid to her by the opposite sex than she is in her “mission” with MI5.  She starts with one boyfriend in school, moves on to a married man, falls for a co-worker at MI5, and then becomes immediately smitten with the very person she’s to bring into the Sweet Tooth fold.  The book never keeps its promise of political alignments or cultural manipulation, but more importantly, Serena herself becomes a missed opportunity.  Her character could have, and should have, been so much more.  While waiting for Serena to discover her inner strength and aptitude for government work, the reader is treated to her listless romantic entanglements and her lukewarm friendships.   She was vapid, shallow and silly.  A female lead should be more.

Throughout Sweet Tooth, I waited patiently for the thrill, for some hint of danger.  Alas, the most excitement that this novel offered was in the retelling of author Tom Haley’s bizarre short stories.  Meant to offer insight into his character, they actually wound up being the most interesting portions of the novel. Determined to witness the moment where Serena discovered her chutzpah, I stuck with the audiobook to the bitter end.  To my chagrin, even the novel’s final “twist” left me with an unsatisfied shrug.

Despite my disappointment with the plot, Sweet Tooth is beautifully written, and I would be remiss if I did not offer proper admiration for McEwan’s style.  His words once again leap from the page, and paint extraordinary detail.

His heroine, however, needed purpose.

This audiobook was narrated by Juliet Stevenson, and she did a beautiful job.  Her silky voice was the perfect match for the written word, and she captured the characters very well.  I would certainly reach for her work again.

3 stars for Sweet Tooth, which are more for the writing than the story.  My first inclination was to give it 2.5 stars overall, but the quality of the writing encouraged me to round up.