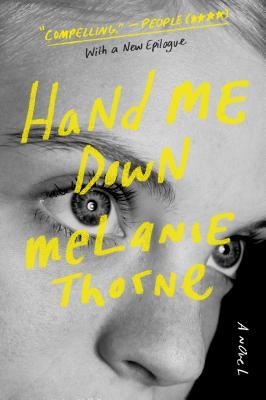 Thanks to Liz at Plume– the trade paperback division of The Penguin Group– for sending us Melanie Thorne’s debut novel Hand Me Down. I had a hard time putting this one down!

Hand Me Down is the story of 14-year-old Liz– the daughter of a strong(-ish) mother and an alcoholic father. Liz had to grow up pretty fast living in a house where her father’s drunken rages would lead to car accidents, drunk driving charges and all out beatings on her mother (Linda). As the older sibling to her sister, Jamie, Liz always felt that she needed to play the role of protector– getting between her father and mother when they fought, preventing Jamie from getting into a car when dad was too drunk to drive and getting them all hidden when the time was right. She saw her mother as an absolute hero once she FINALLY made the decision to leave. It was the 3 of them against the world, through thick and thin, and she thought she would be safe forever.

But now Linda has a new husband, Terrance. He is a younger man and they have a child together (Noah). Soon after their wedding he is sent to jail for a sex crime– he likes to expose himself to young girls. He is getting out of jail after serving 2 years and Linda has gone all Cougar– dressing younger, giggling like a school girl and living for her man. She feels that she HAS to make this relationship work for the sake of Noah. Liz is put back in the position of being protector as her and Jamie navigate the world of living with a pervert.

He scooped me up in his arms and spun me around like I was a toddler while I stayed straight as a corpse. Mom snapped a photo and giggled. He set me down but held me close to his chest, the pressure of his splayed hands across my lower back kept my hips against him. He breathed in my ear, “I missed you.”

“We are so excited you’re home,” Mom said, taking another picture. “aren’t we, Liz?”

“Not as excited as me,” Terrence said. His fingers grazed the sides of my breasts as he released me, and if he hadn’t done it before, I might have thought it was an accident.

Part of Terence’s parole stipulations is not to be in close contact with young girls so, having two living in the house with him is not allowed. Linda casually informs her daughters that they are going to need to move out. She chooses the pervert over her own children but not to worry– it should be just temporary because they are trying to appeal– they will soon be able to live together as a family (WHAT??). Linda is utterly BLIND when it comes to Terrence and totally believes he would never hurt her daughters– but he has already made the first step towards sexually abusing them (his manipulating and pervy ways just gives you the willies!!!).

Their first option is to return to their father– who, it turns out, is the one who notified the police that Terrence was back home living with the girls (nope, he didn’t do it out of concern for the girls’ well-being, he did it for the child support money– so sad!). This arrangement doesn’t last long for Liz– her life is spiralling out of control. She is flunking out of school (because she never attends– her father is too drunk to drive them), she is tampering with drugs and doesn’t know what to do. Following a gigantic alcoholic Christmas blow up at her Aunt Deborah’s house she reluctantly leaves Jamie and is shipped out to her Aunt Tammy’s in Utah.

Living with Tammy finally gives Liz a taste of what living in a real family can be like. Things seem so good there– they hike and make dinners together, she has her own room, is excelling at school and even meets an interesting boy. Then, Tammy’s boyfriend returns. He only lives with her a couple of months out of the year (he works in Australia and only stays in six-week intervals when he has down time) and he was NOT too happy to find Liz there when he returned. True to family tradition of pleasing her man at all costs, Tammy asks Liz to return home for a while– but where is that?

There is soooooo much tension as you read this book. Can Liz over come her life? Will she get a decent education and break the cycle of abuse? Will Jamie be ok? Will pervert Terrence get what he wants? Will their mother ever learn the truth? Read this one and find out– you won’t be able to put it down. 3.5 stars.

According to Melanie Thorne’s bio this story is somewhat autobiographical. Amazing to read that some women would sacrifice everything just so they can “have a man in their life”. Click here for Melanie Thorne’s funny Self Interview about Hand Me Down.