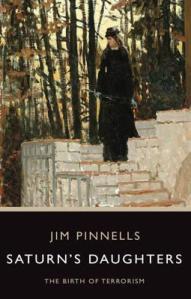 Thank you Midas Public Relations of London for sending a copy of Saturn’s Daughters.  The novel, written by Jim Pinnells, revolves around late 19th century Russia and the birth of terrorism.  As noted in the novel’s description, sometimes terrorism works, and sometimes it does not.  But what happens to the terrorists after repeated failures and infighting?

In the 1880’s, the People’s Will had a single goal: to overthrow the Romanov dictatorship in Russia.  Their plan to assassinate the Tsar was organized by Sonya Perovskaya; a woman completely devoted to her cause.  But how do people change when assassination is their ultimate goal?  What happens if things do not go as planned?  What happens if they do?

For the People’s Will itself, the campaign of terror was moral suicide.  In destroying the Tsar the terrorists destroyed themselves, their lives, their integrity, their very ideals.  Saturn’s Daughters is the story of this failure.

What I did not realize when I started this book was that the focus would largely be on one woman: Evgenya Antonovna Grishina.  Eighteen years of age at the novel’s start, this young woman became involved in the cause of the People’s Will via a romantic link with her cousin Vitya.  Deeply involved with the campaign, Vitya worked closely with Sonya Perovskaya.  His working relationship with Sonya was certainly to the detriment of his feelings for his cousin, but the cause called.  This was clearly written as an unrequited romance, with great attention paid to the changes that these two individuals experienced. As they grew with the cause, would they find themselves closer, or driven further apart?

I have to confess that this is where I began to feel a wedge between myself and the story.

Wildly curious about love and the adult world, and living a fair distance from her cousin, Evgenya began to change.  The sweet but curious girl began to find empowerment via somewhat meaningless sexual encounters.  Her own crusade became personal liberation.  When Vitya discovers Evgenya’s wanderings and proceeds to get angry, Sonya explains to him that the promiscuity had a purpose: “Evgenya – shameless and beautiful.  It is a kind of revolution, Vitya.”  (p. 212)

While I understand the inherent purpose of Evgenya’s liberation, my opinion was that far too much time was spent on it.  I wanted more cause, less personal strife.  About 350 pages into the book, I realized that while the story was well written and carefully researched, I felt no connection to any of the people within the pages.   How the cause changed the people was evident.  It hardened them and made them isolated.  The message that being devoted to a violent purpose can wreak havoc with one’s psyche was not lost on me.   Lacking empathy for the characters, however, forced me to keep the story at arm’s length, which left me a bit cold.

This is not to say that the detail provided wasn’t interesting, nor does it mean that the story itself wasn’t an incredibly well-researched mix of real and fictional characters.  There’s no question that Saturn’s Daughters was a thorough narrative of a terrorism campaign.  I respect and admire the attention to detail and the impact of the overall assassination goal.  It was a glimpse of a bleak reality, and the aftermath of destruction.  When one has a cause that is deemed more important than friendships, loyalties and love, then part of the soul simply goes the way of the campaign.

Truly, if a violent cause is successful, then what is the outcome?  A grand celebration of murder?  In the end, how many must die for the cause?  Certainly it would not just be the single target.  Is any amount of human sacrifice appropriate?  At times, it seemed that the success of the campaign would inherently be more harmful than the failure.  When life is sacrificed, so too is character.  That in itself requires some thought.  While I felt great distance between myself and the plight of the characters in this novel, I did note with great certainty that even the most valiant attempts for freedom can result in a black mark on the self.