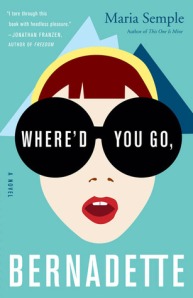 This novel was a marvelous surprise!

Maria Semple’s Where’d You Go, Bernadette is a bold and compulsive read. On the surface, the novel smacks of mystery, but this is truly more a character study than anything else.

Bernadette Fox is a curious soul.  She suffers at the hand of her own brilliance, and is left scarred by stifled creativity.  Delving into her past reveals a surprising career as an architect, and a long history of very odd behavior.  Current day, she has a husband who’s a tech guru at Microsoft and a sharp daughter whose survival from a heart defect is a miracle in itself.  They actually live in an old and decrepit school in Seattle (because they can afford it), complete with a sprawling landscape and ridiculous neighbors.  The private school that their daughter Bee attends is peppered with a new breed of helicopter parents who consistently wait for Bernadette’s social mishaps.  (There are many.)  No matter to Bee though, because she completely adores her wacky mom.

You quickly surmise that Bernadette may have more wrong with her than the occasional argument with the neighbor over spreading blackberry bushes when you’re introduced to her virtual assistant, who lives in India.  For what appears to be a small fee, this assistant will do everything from making a dinner reservation to calling in a prescription for motion sickness pills.  This assistant becomes invaluable to Bernadette when plans emerge for the family of three to take a trip to Antarctica; a reward for Bee’s exemplary grades in middle school.  It’s clear from the start that this trip represents a serious problem for Bernadette, who clearly suffers from a debilitating case of agoraphobia.   Her growing inability to interact with anyone outside her home forces her to behave increasingly erratic, albeit some of her antics are downright hilarious.  (All I’m going to say is, “billboard.”)

Her withdrawal from society and penchant to live through her virtual assistant eventually lands her in a heap of hot water, and then, suddenly, she vanishes.

The search for Bernadette is taken up by her grieving daughter, who just knows in her heart that mom is somewhere.  To locate her mother, Bee acquires and pours over email messages, official documents and top-secret correspondence, which culminate into a character study unlike any other.  The format of this novel is in fact the messages themselves, and it takes a moment or two to get accustomed to the back and forth between e-mails and letters.  Once dug in, however, you’ll find that Where’d You Go, Bernadette is a delicious read.

My only frustration with this novel was with Bernadette.  I started the story loving her every thought and action, but then found myself disliking her by the book’s close.  Yes, her character was not entirely in her right mind, but her somewhat narcissistic tendencies forced her to neglect her daughter, which I found intensely frustrating.  In other words, her quirky nature was fun for a while, but after being wrapped up in the world of Bee, I wanted more stability for the girl.  I won’t give away the end, but I will say that I had more faith in Bee than any other character in Maria Semple’s world.

This audiobook was read by Kathleen Wilhoite, and I must say that she was excellent.  My first reaction to hearing her voice and seeing her name was curiosity, having only seen her playing supporting roles in television.  She carried the voices beautifully though, and I was pleasantly surprised by her tones and inflection.  Well done!

4 stars for Where’d You Go, Bernadette.

One thought on “Audiobook Review: Where’d You Go, Bernadette”