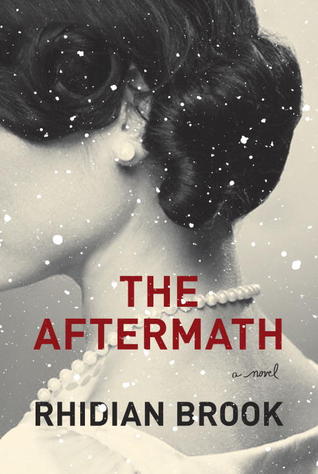 Rating: 4.5
The Aftermath
A Novel by Rhidian Brook
Audiobook Narrated by Leighton Pugh 2013 /9 hours and 43 minutes

Hamburg, 1946. While thousands wander the rubble, lost and homeless, Colonel Lewis Morgan, charged with overseeing the rebuilding of this devastated city and the de-Nazification of its defeated people, is stationed in a grand house on the River Elbe. But rather than force the owners of the house, a German widower and his rebellious daughter, out onto the streets, Lewis insists that the two families live together.

But The Aftermath is so much more than this, such a short title and such a short description that do not give you the full power of its meaning and scope. Upon finishing I just sat there and pondered how powerful and aptly stated this title is for this novel. The audiobook matched that power with its magnificent narration, range and emotion as spoken by Leighton Pugh.

Originally the ARC was received by Random House Canada with a lovely little note from Lindsey saying she noticed this was on my To Read pile and to enjoy! Now, does that girl not know me and my reading habits or what? But then I saw that it was available in audio and I jumped at that opportunity. I’m really glad I went with the audio version! Pugh breathed such emotion and life in to this story. His ability to speak with an American accent, or a Russian one or a French one left you smiling. But what left you breathless was the voice he gave Ozi, one the feral children fighting for survival and companionship with a gang of other feral children. Ozi’s voice is forever altered by a fire that scorched his throat. So the voice Pugh invented for Ozi was harsh and rough but brilliant. As well, and again another fantastic reason for gushing about audiobook love, is the pronunciation of the German words, places and people. Fantastic. It just lends great authenticity to the story and allows for exquisite flow and complete enjoyment.

So….The Aftermath. How poignant. I’ve read plenty of WWII historical fiction novels. Plenty. But never have I read one that so thoroughly captures “the aftermath”, and in this case, the aftermath for the destroyed and defeated Germany, but for the many, many and varied people involved. Germany and WWII are synonymous, wouldn’t you say? The events during the war are so heavily linked with Germany. But what of the aftermath? Germany has fallen, has lost the war in epic disgrace and exposed acts of the most horrific crimes against humanity as a result of the clenched fist of power by Hitler and the Nazis. As the Time Out in London so superbly captures, The Aftermath will:

“You’ll find yourself seduced by the quiet power of the…prose, the subtlety of [Brook’s] narrative technique, with its onion-skin layers of meaning, sympathy and revelation.”

Absolutely. It’s not a plot-heavy story herein. It’s Brook’s stunning creation of a myriad of characters whom profoundly and powerfully tell their story in a way just as Time Out says, with onion-skin layers of meaning, sympathy and revelation. Each of these characters are peeled back to reveal how the aftermath has affected them.

First we meet Ozi, the leader of a band of feral children. Gangs of these children roam the devastated landscape fighting for survival, begging for food, secretly staking out places to sleep each night. They are also beaten and scorned by the Occupied soldiers. Ozi, and his character in this story rest on the periphery of all those involved, yet he and his plight provide stunning insight to these hundreds of displaced children.

Then we meet the person to be considered the main character, Colonel Lewis Morgan. He is charged with overseeing the rebuilding of the city of Hamburg and the de-Nazification of its people. He is to requisition a home suitable to his role and standing and re-unite his family there. His wife, Rachael and only remaining son, Edmund arrive shortly after this requisition and Lewis’ unconventional decision pertaining to the German owners.

Rachael remains bereft at the loss of her eldest child whom was killed during a bombing back home in London. A bombing and death caused by the Germans. She fully embraces the “non-fraternization” laws and firmly drills this in to Edmund’s head. Poor Edmund is left to fade quietly in to the shadows all to aware of his mother’s crippling grief over his brother, and her considerable and continued unhappiness. Even the reunion with Lewis does little to return her to how she was before her son’s death.

The home Lewis is to requisition is owned by Stefan Lubert. “Herr Lubert” or “Lubert” as he is so often referred to in the book, (never by his first name), has lost his wife Claudia to the war, and lives with his stubborn, yet traumatized daughter, Freda. Lubert was an architect before the war, but until he receives his clearance papers that state he is not a Nazi, he must work in a factory. I found the character of Freda to be very interesting and liked how Brook chose to portray her. We know that every child was indoctrinated and forced to train to be members of the Nazi Youth. But what happened to these children once the Germans were defeated? For Freda, she has not let go of her training and each day performs the rigorous physical exercises that were once required. Even after her father’s admonishment, she continues and also joins in a gang of others that are resentful to the occupation of their country. I thought her character was brilliantly portrayed to show this part of the aftermath.

Lewis is quite different in his opinion and emotion about his role in the de-Nazification of Germany. He shows incredible compassion and understanding for their plight, and because of this encourages Lubert and Freda to remain in the upper level of his home while he, Rachael and Edmund occupy the main part of the house. Lewis is also against this thinking or law against fraternization with the Germans and encourages regular interaction with them. He is disgusted by the attitude that these broken and destroyed people remain “the enemy”.

Now, The Aftermath may take the predictable turn with Lewis leaving for many months to another part of Germany that requires his supervision and Lubert and Rachael left together in Lubert’s home. However, again, Brook provides a wholly sympathetic viewpoint to their affair. It is almost a necessary thing for Rachael. While Lubert feels it has the potential to be a step towards the future and letting go of his wife, for Rachael she experiences it as an awakening and deeper understanding of the love she has for Lewis. It changes her, but for the better for the future of her family. While it ends fairly neatly and without any serious repercussion, the reader is not left annoyed by this but rather is sympathetic to the healing so needed by all.

The Aftermath closes with Ozi in a touching and heart-wrenching moment. Which I think serves as a reminder for what truly is lost for so many in the aftermath.

Brook’s acknowledgement at the end, reveals that his grandfather, Walter Brook, actually requisitioned a home in Hamburg and did allow the German owners to remain in their property. They shared this home for five years following the war, and this is what provided the inspiration for this novel.

The writing is beautiful, the narration is stunning so I truly have to say that whichever format you choose to read The Aftermath in, either will certainly be most rewarding.  4.5 stars.

Thank you again to Lindsey and Random House Canada for the pleasure of reading The Aftermath.

2 thoughts on “Audiobook Review: The Aftermath”