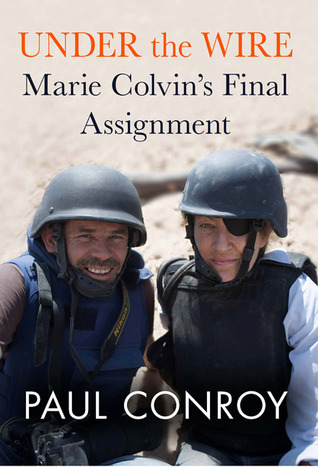 It’s only been a few short hours since I’ve closed the pages of Under the Wire: Marie Colvin’s Final Assignment by Paul Conroy. I’m truly at a loss for words. I am not at a loss however for emotion or deep pensive thoughts. Which is what I have been doing since reading the final lines of this remarkable book.  It’s certainly a book that I’m so glad to have accepted from Paul’s publicist. I also cannot stop looking at the cover photo and feeling a tremendous sense of loss and sadness. Journalism certainly lost a remarkable woman and an incredible champion to bringing to the world’s attention to the plight of every person suffering within their war-ravaged countries.

Marie Colvin’s drive and determination to enter into some of the most horrific and deadliest countries being gutted and destroyed by war had nothing to do with seeking adventure or being an adrenalin junkie. The true reason Marie Colvin risked her life, and ultimately gave her life, was to bring our attention and awareness to the everyday person’s struggle to survive while their country was being torn apart, usually by some maniacal leader. They would consistently slip “under the wire” and secretly in to these countries, and It was in this final assignment in Syria that Paul writes about, doing exactly just that, where Marie lost her life.

“This is what it was all about for her – reporting on the ordinary people caught up in war. Much is written about journalists being war junkies or adrenalin addicts. I would challenge anyone in the world to accuse Marie of being one of these. Yes, she would jump borders and risk life and limb, but only ever for the story; for the very people we were now about to visit. She had little time for people who accused foreign correspondents and photographers of being dysfunctional thrill-seekers.”

Paul Conroy has written a remarkable tribute to her, their friendship and her incredible courageousness. He has done so with amazing attention to detail and a fierce command of language. It is also written with humour but incredibly as well, with a sense of non-stop, on-the -edge-of-your seat anticipation and anxiousness. You feel as though you are actually there, by their sides, as they dodge bullets, brace against the impact of non-stop mortar shelling and the crippling fear and desperation to arrive safely across a border, to a safe-house or into an area where they can release these horrifying images and stories of the young children, babies and women and men suffering while trying to survive in countries that are living through war and crippling devastation every single day.

There was a speech Marie Colvin gave at St Brides on Fleet Street, that Paul writes about (included below), again giving importance to the work that war correspondents are doing. You can also read her full speech on the site dedicated to Marie here and at http://mariecolvin.org/

“In a famous speech she had given at St. Brides on Fleet Street, a church traditionally associated with journalists, a few years earlier, she argued passionately for the need to send reporters to dangerous places. She believed war reporting was a way of speaking truth to power, of holding governments to account by telling the public what their governments were doing in their name. For her, war reporting was about bearing witness to the plight of ordinary civilians so that she could record it for the world and reveal the brutal consequences of decisions taken by men in high places. It sounds grand, but she believed that without war correspondents governments could conduct themselves as if in a vacuum: their lies and propaganda could be conveyed without challenge, allowing them to carry out atrocities far from the prying eyes of the world. In her words, it was about sending back the first rough draft of history and cutting through the sandstorm of propaganda that flares when armies, tribes or terrorists clash.”

Under the Wire is an emotionally crippling yet wild adventure-ride of a story. But it is also an essential one that requires wide readership. You can assure yourself however that you are reading a great, great story at the hands of a very accomplished writer. Conroy’s command of the language is stunning. And while he is writing of his great respect and love for a great friend and accomplished journalist, you are also reading about an incredibly courageous Paul Conroy. I could not begin to imagine doing this on a frequent basis, but he’ll just pass it off saying he can’t imagine the trouble he would get in to if he held down a “real job”. Please read Under the Wire, and at the same time give pause and consideration not only to the incredible and remarkable job these war correspondents take on in order to ensure the world does not ignore what is happening to others less privileged than we are, but also to what these people themselves are suffering and enduring. As Conroy wrote at the very end of this book, at the time of his writing, no nation had yet stepped in to help the people of Syria.

5 stars for this incredible story.

From the publisher: Zero Dark Thirty meets 127 Hours – Under the Wire is a riveting war journal from photographer Paul Conroy, who accompanied Marie Colvin (called by her peers “the greatest war correspondent of her generation”) during her ill-fated final assignment in Syria.

Under the Wire: Marie Colvin’s Last Assignment (Weinstein Books; Hardcover; 320 pages; October 8, 2013) is by photographer Paul Conroy. A former soldier with the Royal Artillery, Conroy has worked extensively in combat zones, producing footage from conflicts in the Balkans, the Middle East and Libya.

Marie Colvin, the internationally recognized American foreign-war correspondent who was killed in a rocket attack in 2012 while reporting on the suffering of civilians inside Syria, was renowned for her flair and her fearlessness: she reported from dangerous places no other hard-core correspondent would dare to go. Conroy, who had forged a close bond with Colvin as they put their lives on the line time and lime again to report from the world’s conflict zones, was with her when she died. Under the Wire is Paul’s gripping, visceral, and moving account of their friendship and the final year he spent alongside her.