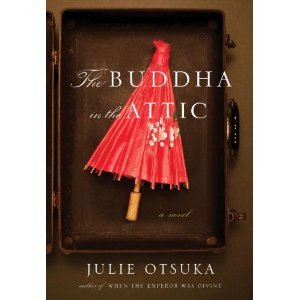 These are some of the words that often came to mind while reading this seemingly short (about only 140 pages) little gem about the collective experiences of Japanese women that were brought over to America to marry Japanese men enslaved in work camps just prior to WWII.

It is written in the collective, in that it’s not one narrator but the combined stories of all women that were duped in to believing they were leaving behind a dismal life in Japan to the wonder, glory and freedom of America. They were duped when they believed the letters these men wrote promising prosperity and fortune as they were being married to handsome Japanese bankers and doctors. No way they would be married off to a field worker or fisherman! Oh, the promises of a life in a big home, going out for fancy dinners, plays, operas. They travelled by boat for days and months on end, only to find the pictures and letters sent to them lies. Instead they found themselves married off (brutally) to fisherman, field workers and gardeners enslaved in work camps. Instead of the big and beautiful home, they slept in the barn on a straw mat next to cows and horses, or in storage closet in the back of the house and were not permitted to live the American lifestyle – they weren’t wanted by the Americans for friendship, they were there to fulfill the needs of these Japanese men. They could not get their hair cut by the barber – their hair would ruin their scissors. They had to ride at the back of the bus, they could not shop in stores where the Americans shopped.

It is beautifully written and I came to really love this collective tense of writing, “We threw ourselves into our work and became obsessed with the thought of pulling one more weed. We put away our mirrors. We stopped combing our hair. We forgot about makeup. We forgot about Buddha. We forgot about God. We developed a coldness inside us that still has not thawed. I fear my soul has died. We stopped writing home to our mothers. We lost weight and grew thin. We stopped bleeding. We stopped dreaming. We stopped wanting. We simply worked, that is all….And often our husbands did not even notice we’d disappeared.” (page 31).

At first glance, this book seems so short, and yet it packs so much that I feel anything more would have taken away from its beauty and power. And just as these women are coming to terms with their new lives, WWII and the bombing of Pearl Harbor occurs. And the smart sense of timing for this little book becomes so wonderful in its release as it mirrors so perfectly the current American sentiment and mass hysteria of Muslim culture post 9/11. Oh how the Americans love (and continue) to crank up the fear machine of people that not considered “American”. This is so wonderfully and sorrowfully demonstrated by Otsuka’s succinct writing. I could go on and on about the points throughout, and about the parallels to so many persecuted groups, but I’ll only simply tell you to read the book. Just read it.

“Overnight, our neighbours began to look at us differently. Maybe it was the little girl down the road who no longer waved to us from her farmhouse window. Or the longtime customers who suddenly disappeared from our restaurants and stores…Club ladies began boycotting our fruit stands because they were afraid our produce would be tainted with arsenic. Insurance companies cancelled our insurance. Banks froze our bank accounts…Children took one look at us and ran away like frightened deer. Little old ladies clutched their purses and froze up on the sidewalk at the sight of our husbands and shouted out, “They are here!” And even though our husbands had warned us – They’re afraid – still, we were unprepared. Suddenly, to find ourselves the enemy.” (page 62)

“It was all, of course, because of the stories in the papers. They said that thousands of our men had sprung into action, with clockwork precision, the moment the attack on the island had begun. They said we had flooded the roads with our run-down trucks and jalopies. They said we had signaled to the enemy planes with flares from our fields….Burst dams. Burning oil fields. Blasted roads. Blocked tunnels. Poisoned reservoirs. And what was to stop us from walking into a crowded marketplace with a stick of dynamite tied to our waist? Nothing.” (page 63)

The Buddha in the Attic is at once both beautifully written and also very sad to read. A beautiful, collective and sorrowful tale of these Japanese women’s lived experiences. 4 star read.