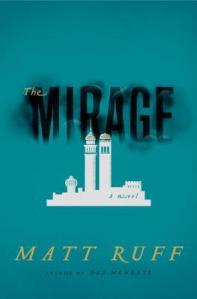 First, I have to note that I love the work of Matt Ruff.  I gave 5 stars to Set This House in Order and 4 stars to Bad Monkeys.  He has other books that are on my to-read list, and I look forward to tackling every one.  Matt Ruff is clever, creative, and spins incredibly complicated tales that only a true author can pen.

I did not enjoy The Mirage at all.  I tried.  I tried with all my might and patience to get involved, to feel invested, to care about the characters the way I cared for those in his other novels.  I also had the other reviews hanging over my head — rave reviews… and I kept wondering what the heck I was missing.  So, I tried harder.  I read more…. and more….and then, it was done.  And I was terribly disappointed.

The Mirage is a twist on history.  What if the attack on the Twin Towers was actually reversed?

11/9/2001: Christian fundamentalists hijack four jetliners.  They fly two into the Tigris & Euphrates World Trade Towers in Baghdad, and a third into the Arab Defense Ministry in Riyadh. The fourth plane, believed to be bound for Mecca, is brought down by its passengers.

The United Arab States declares a War on Terror.  Arabian and Persian troops invade the Eastern Seaboard and establish a Green Zone in Washington, D.C. . . .

But what if this is not real?  What if it is nothing more than… a mirage?

Ruff went to extraordinary lengths in this book to alter everything we know. Definitions were turned upside down.  Historical events were retooled. Important figures were assigned new goals and different personalities.  Ruff even included regular excerpts from an online “Wikipedia” of sorts, which included modifications to the truth that had the power to leave the reader spinning.  Everything served as an alternative history.  Everything was a surrogate reality.  But whose eyes were being covered by the wool?

Thematically, there’s no question that the plot was creative.  Where I grew most weary, however, was in reading about actual people, who were morphed into different characters for the book.  “President Osama Bin Laden” was one. The “Quail Hunter of Texas” was another.  David Koresh…. Timothy McVeigh….. they all had roles to play in the mirage.

‘That is the official story,’ Mustafa said.  ‘And given the bloodthirstiness of some Christians, it might well be true.  But remember a key element of the mirage legend: America is the real superpower, while the individual states of Arabia are just that, independent nations.  Weak ones.  When a weak state is drawn into a fight with a superpower, what happens to it?’

Samir shrugged.  ‘It gets its ass kicked.’

Mustafa looked at Amal.  ‘What did Rumsfeld say America did, in response to 9/11?’

‘Invaded Iraq,’ she said.  ‘His story about what happened to the Hussein family was heartwarming, but when I asked what the war did to the rest of us he pretended not to understand the question.’

‘Wait,’ said Samir.  ‘So you’re saying that in this alternative reality of Rumsfeld’s, Osama bin Laden is an Iraqi?’

Herein lies the nagging problem that I could not shake.  The tale became such a reach, so outlandish, and I’m sorry to say, so….. hokey, that I could not muster attachments.  The end of the book also felt rushed; after such a build-up, I was left shaking my head at the resolution.

Judging by the average rating on Goodreads, I am in the minority here, and I’m sure Mr. Ruff will continue to enjoy great success with this newest novel.  I love to see authors enjoying the fruits of their labor.  I guess I just can’t like all of the finished products.

I’m sorry to say….. only 2 stars from this Hoarder.