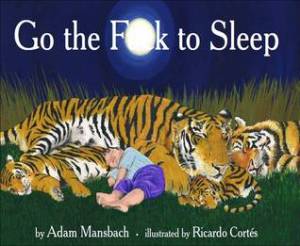 No, your eyes do not deceive.  A Hoarder is about to review the audiobook Go The F*** To Sleep.

You’ve seen the book.  Most likely, you saw it when it was being distributed via e-mail, with subject lines that read “have you seen this??” and “this is hilarious!” and “you mean I could have written a best seller when I was completely sleep deprived??”  If Go The F*** To Sleep didn’t manage to hit your inbox, then you’ve probably seen the actual picture book.  Parents pass it around with a wink, shielding their tots from the cover, lest the child exclaims “Ooooo!  Book!  Mommy and Daddy read??”

No, gentle readers, this is a storybook for parents.  And if you are a parent, you can identify with every single solitary word of Adam Mansbach’s book.  The artwork is beautiful.  The words are poetic.  The message is clear.  For every bleary-eyed, exhausted, near-nervous-breakdown parent who has just taken yet another lap around the house with a sleepless child in his/her arms, empathy awaits.

Now, the audiobook.  I don’t know who called Samuel L. Jackson to read this, but brilliant.  What a complete no-brainer.  Who better to express the frustration of a sleepless parent than Samuel L. Jackson, the man in Hollywood who exudes cool?  This man has turned swearing into an art form, and you can’t help but love him for it.  Truly, if anyone was ever to launch a string of profanities at me, I could only hope for the expertise of Jackson.  It would be an honor.

Driving into work, I popped the CD in, and quickly burst into laughter.  The book comes alive with Jackson’s tone, sincerity and his unbridled frustration, as his voice deftly moves from soft and sweet to duck-your-head wit’s-end.  The truth of the book resounds in his inflection, and no matter how much he seethes with defeat, you know that the love is there.  Every parent has said this phrase to themselves.  When their child has asked for their 18th glass of water, 12th hug and 6th trip to the bathroom, every parent has thought it.  It doesn’t mean we love our children any less.  It doesn’t mean we’re bad parents.  It just means that sometimes, when you have walked ruts into your hallway holding your bug-eyed child, driven countless miles trying to get a droopy eyelid, heated umpteen bottles trying to soothe, or rocked in a creaky chair until your bottom half is numb and you’ve forgotten your own name…..you have probably thought to yourself…..

It was high time someone bound that thought together in a book, to prove that we’re not all crazy.  Hats off to Adam Mansbach.  To you, Mr. Jackson….