John Taylor, founding member of Duran Duran and bass god extraordinaire, has written his autobiography. WOW! Am I dreaming?? Reading + Duran Duran– my 2 favourite things all in one!?? Yes! It is true! In the Pleasure Groove – Life, Death and Duran Duran tells the story of how the most wonderful band in the world came together, how they lived through the excessive 80’s and how they are still making FANTASTIC music to this day (seriously, pick up their latest– All You Need Is Now— it is great GREAT stuff!!).

For those non-Durannies out there, Duran Duran is a band that was formed in Birmingham, England in 1978. They were part of a musical movement called the “New Wave”– a kind of glam/punk fusion that infiltrated the radio waves during the early half of the 1980’s. The look was extremely androgynous and Duran Duran definitely fit the mould–  Frilly shirts? check! Scarves and sashes? Check and check! Burgundy hair, eyeliner and pouty poses? Check, check and check! By 1984 they had 5 hits, were the HUGEST band in the world and 13-year-old girls EVERYWHERE had posters of John Taylor on their walls (myself included). Some 30 years later our JT tells the tale from his perspective.

JT has said in several interviews that his book is not a time-line history of the band filled with facts that you could find with any Google query but it is more of an opportunity to pay homage to the place of his birth (Birmingham) and to the people who made it all happen. As the “young prince of the neighbourhood” we hear about his earliest memory (walking to church with his mum to listen to the hymns), his introduction to “popular music” through his cousin Eddie and meeting up with pal (and co-founder of Duran) Nick Rhodes to skip school and sneak off to concerts at age 14 (same age as my son! YIKES!)! Once he caught the music bug he KNEW that he had to be a part of it– all he had to do was learn an instrument! Maybe I would have liked a teenie tiny bit more about his brief solo career and a bit more detail regarding the Reunion (of the Snake!) of 2003 but– hey! I can’t complain! 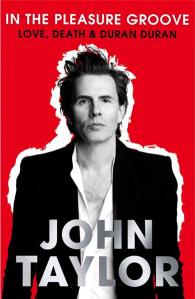 Reading this book would have been a pleasure on its own but I made the wise choice to listen to the Audiobook narrated by none other than the man himself!! Can I love him even more after that?? I don’t think so! JT’s speaking voice was absolutely perfect– it felt as if he was speaking just for me! It was touching to hear him speak so fondly of his parents, his band mates and to fellow musicians that he has both admired and been in competition with. His ups and downs make him even more human and possibly even more attractive.

John Taylor is a genuinely nice guy who is excited to be sharing his story as I found out in Toronto, Ontario on October 29, 2012. Over 500 people showed up at the Indigo Bookstore (in TERRIBLE weather) to listen to him speak about his book and he stayed until all who wanted a signed copy were satisfied! Such a GREAT guy! Can’t WAIT for the new album and to see them live again (which they are planning for 2013). Not every band can brag a 30+ year old career! I am a lucky fan! 5 stars from this Durannie (maybe a 3.5 for non-fans– if there is such thing)!