Ok– let me start off by saying that the experience of reading this book was a bit like a roller coaster ride.

Catapult: It started with an email from W. Brett’s administrator/publicist/fun co-ordinator asking us to review a book that is TOTALLY outside of our normal realm of reading. Is it a business book? Self help? Memoir? Maybe all of the above? All we know is it is “a dude from the Dragon’s Den” and the fun co-ordinator said our blog was “fantastic” and had “great notoriety”! Awwww! Thanks! With dewy eyes we checked out his website (which I thought was quite clever) and, sure, we’ll review it. 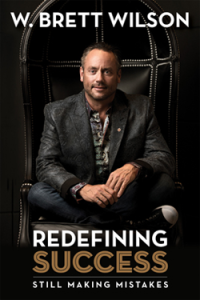 First Drop: Penny gets the book in the mail a few weeks later– in all of its over packaged, self-indulgent glory– and we are told we have a deadline! “Please read and review as close to the release date as possible” which is 2 days away. We are thinking “Hand over the pen filled with goat’s blood cos we’ve signed a deal with the devil here ladies!” and we all have a nice laugh.

Airtime: My experience with Dragon’s Den was the commercials I had seen while watching Rick Mercer or The National on CBC. Meaning, I had absolutely NO IDEA who W. Brett Wilson was. Was he the mean bald guy? Was he the woman with the red and grey hair? I had no clue. I get the book from Penny and notice that it is littered with photos of the guy in all kinds of unnatural poses. There are cheesy musings written to describe each contrived photo. All I can think is: He must be full of himself.

Screeching Halt: The 80’s and 90s were very good to W. Brett. He has it all– success! money! family! He is rubbing elbows with some of the richest people around. There is a lot of name dropping of money giants from around the world that all seemed to be “very successful”, “close and personal friends” that he “learned a lot from” and “highly respects” (I recognized the name Richard Branson of Virgin Records fame but that was about it– my bank account is not that big!). Then, at the height of his success his wife leaves him because he works too much. He still has money but loses his family that he has been making the money for (and oh– he finds out he has really bad prostate cancer at the same time– it comes across as an aside in the book as well). He realizes these mistakes so he completely changes his business philosophy– stay filthy rich but take care of your loved ones and your health first. Bla! Bla! Bla! Cheesy, rich guy– I don’t feel sorry for you. I need a break! The book gets put aside– deadline or not.

Cork Screw: We get a reminder from the fun co-ordinator. “Your review isn’t done yet. When it is done please upload it  HERE.” We (as in I) have committed to reading it so let’s get back to it. I pick the book back up and I happen to be at the Dragon’s Den part.

Twister: Dragon’s Den is a Canadian show where aspiring entrepreneurs pitch to five multi-millionaires, with the expertise (and the money) to turn great ideas into incredible fortunes (I think it was called Shark Tank in the U.S.). As I mentioned I had never watched the show so I Googled some of the products that W. Brett had invested in and that is when I changed my opinion of him. I not only found myself watching 4 or 5 deals from “The Den” but a couple of his presentations, some T.V. interviews and footage from his yearly Garden Party as well. In the book I thought he came across as braggy and conceited but in real life real life he is a lot more soft-spoken, intelligent and charming. I misjudged him by reading his book before knowing who the heck he even was. If you don’t know him Google first, read later (DD bio).

Happy Ending: This is a memoir, not a business book (as I had originally pegged it) and if you go into it with this knowledge you will enjoy it more. I would have liked to know a bit more about his personal life rather than all of that business but I think that is what he knows best so that is what he writes. W. Brett is a true PHILANTHROPIST– which by my definition means that he is rich enough to make a difference and mindful enough of world issues to give a shit. W. Brett gives MILLIONS of dollars of his own money to various causes and he inspires others to do the same. The mistakes he has made in his past made him become a better person, father and partner and investing in people rather than money has allowed him to make a difference in the world. Did he need to write a whole book? Probably not but fans of DD and high power business folk will probably enjoy it better than a broke Lab Tech, Book Blogger but it is uplifting to see that not all super rich investment banker/oil moguls are jerks (and I love that he quotes from Harry Potter). 3 stars.

Men are not known by their abilities, but rather by their choices. ~ Albus Dumbledore